Well, folks, Box Office Mojo reports that The Avengers smashed the last Harry Potter movie's weekend opening record in the US, with an estimated $200,300,000. Edit: After its initial estimate Box Office Mojo has since edited its story with an even higher figure of $207,400,000.

I was predicting that it would set a new record (before the weekend started, I predicted $172 million, compared with the Harry Potter $169 million), but even I was too conservative. The Avengers is also performing incredibly well outside of the US, so it is on its way to becoming one of the most commercially successful movies of any kind of all time.

I have my complaints about the movie - a certain amount of looseness and self-indulgence, a certain lack of suspense and felt danger - but it's obviously doing something right, or more than one "something". 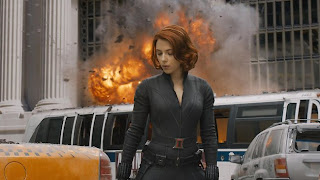 One of the somethings that it's doing right is giving superb, loving interpretations of all the main characters. I think, too, that the actual choice of an Avengers roster was inspired. We've now seen that Hawkeye can be made a cool character and we've certainly been shown how much depth and potential The Black Widow had - and it's been exploited brilliantly in the movie, as she is made to shine throughout The Avengers; there's no sense here that Natasha Romanoff is overshadowed by, or of secondary importance to, the male heroes.

I'm not the first to observe (though I'm not sure who was!) that she's the breakout character of this movie. She could now become Marvel's most iconic female character, and a much more important player in the Marvel Universe more generally. Expect The Black Widow to turn up all over the place now.

This does raise the question of whether Marvel has other female characters who could succeed so well on the big screen. It's still the case that there are five male Avengers to one female Avenger in the movie, and even when you add in Nick Fury, Maria Hill, and Agent Coulson from S.H.I.E.L.D., you have a very male-heavy cast of heroes. Over in the other cinematic versions of Marvel franchises, the gender balance is a little bit healthier - well, it is in the X-Men movies (which are made by a different studio: in this case, Fox). But for various reasons that we could go into, the X-Men movies have not boosted the female characters in the popular imagination the way they have Wolverine, Magneto, and Professor X. I'm hoping that Scarlett Johansson's ass-kicking version of The Black Widow might start to change things.
Posted by Russell Blackford at 10:39 am

Carol Danvers is (finally) taking over the Captain Marvel role this July in the comics, which I'm looking forward to. There's a possibility that Carol could well be the Marvel Movie-verse Captain Marvel, too, if they follow through with a Guardians of the Galaxy movie and make her a lead character in it. There's an outside chance of an Inhumans movie, which could tie into the Kree empire if they have the wisdom to use Hickman's expanded "Universal Inhuman" mythos. (Plus, Inhumans and Carol against the Kree and their Supreme Intelligence would look awesome onscreen.)

Bendis might push for Jessica Drew or Moonstone. I don't believe Universal has the rights to Spider-Woman, though that would kind of be awkward since the lay audience member would wonder why they didn't use her better-known male counterpart.

Yeah, I think Carol Danvers has a lot of potential. Getting her accepted as Captain Marvel will take time, so I hope they are prepared to stick at it. Certainly it would help if she were introduced as "Captain Marvel" in a movie.

The Inhumans rock - Black Bolt and Medusa, in particular, are great characters.

Moonstone has incredible potential - if presented with her full suite of powers and skills, she could be presented as a very sinister and credible villain, even for the Avengers. I'd love to see her done well on the big screen.

One thing that I noticed (or failed to notice) is that they didn't do any slow head-to-toe camera panning of Natasha or Maria.

There were still a couple of male-gaze shots, particularly when either Natasha or Maria are walking away from the camera. But they didn't do the head-to-toe camera panning thing.

Or they did and I missed it due to distraction, which is a possibility. But I checked with my girlfriend after the movie, and she couldn't remember one either.

I was specifically looking out for it because it's Joss Whedon, and for all that he comes under flak from some corners (of course) I generally feel that he does a reasonably good job of depicting female characters as sexy/strong but not objectified. The slow head-to-toe camera pan is usually a big symptom of that thinking, so it's absence was noteworthy to me.

It's one of those issues I'm never quite sure of, so if any other readers have something to add (or anything I've said they think is wrong) then I'd be keen to hear more.

Yes, I thought he/they did a good job of presenting a sexy, strong female character who was not sexually objectified, let alone sexually demeaned. I haven't heard any complaints from women so far, so I think we can take it that there was at least nothing egregious.

She did have certain female-coded skills, but she seemed just as effective in combat situations as Captain America and Hawkeye. The sexual politics of the movie seemed pretty good apart from the sheer preponderance of male roles - which raises the question for me of how a movie would go with something more like a 1980s X-Men roster of characters, i.e. with lots of powerful women with distinctive signatures.