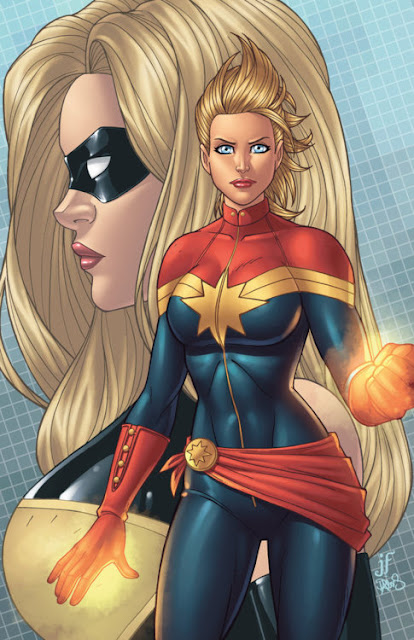 Rumours are now starting to fly about a movie showcasing the superheroine Carol Danvers, currently known as "Ms. Marvel", but about to be given (permanently or not, I'm not sure) the historically iconic name "Captain Marvel" - a name that Marvel Comics owns and could use very effectively for one of its most high-profile female characters.

If we got a Captain Marvel movie with Carol Danvers as the version of the character that we see, and if the same character were then segued into a further Avengers movie, the result would surely be to establish Carol Danvers in the public imagination as the Captain Marvel, even though at least two high-profile characters (and several less significant ones) have had the name in the past. As I said before, somewhere in this month's discussion, that would be quite a marketing coup.

It sounds as if we'll know in a couple of weeks. At times like this, I miss my stint of media tie-in writing, but it's fun watching what happens as Avengers-related events now unfold. (Meanwhile, The Avengers has now surely passed $1.2 billion in the worldwide box office, extrapolating from the current almost-up-to-date figures at Box Office Mojo.)
Posted by Russell Blackford at 7:20 pm

As we get more and more of these heroes out there, I'm thinking we're going to have to see more cross-over movies and introductions through cross-overs.

I'm confused about the "ownership of the Captain Marvel name" dealeo. Now that DC has given in to calling what was once their Captain Marvel "Shazam," does that mean they've relinquished their claim on the name and can't undo that decision.

I can never remember exactly how it works, but the end result of the complex history is that Marvel ended up with the rights to the "Captain Marvel" name, which is why DC can't use that name for the Shazam character. I don't think there's any legal controversy about it. One of the Wikipedia articles goes into it if you want to track it down.

Just looking at it again, DC partly brought this on itself in the early 1950s by stopping Fawcett from using the Shazam/Captain Marvel character, claiming that it was a rip-off of Superman. The character was not used for nearly 20 years, when DC got the rights to use it.

But meanwhile, during that 20-year window, Marvel managed to get the legal rights to the name, which it originally applied to its Mar-vell character, but it has also applied the name to others (well, Monica Rambeau comes to mind, but now, seemingly, Carol Danvers).