Heading into the unknowable

My colleagues at the Institute for Ethics and Emerging Technologies have published an edited and abridged extract from At the Dawn of a Great Transition under the title "Into The Unknowable".

The book itself is slightly more "academic" than this extract adapted from its opening pages: i.e., it uses more formal notes, citations, etc., and in places it becomes more densely argued as I wrestle with the philosophical pros and cons of radical human enhancement. But I've gone to some trouble throughout to make the text as accessible, and perhaps even entertaining, as possible. With that caveat duly provided, the extract gives you a good idea of my topic, approach, and style. Check it out if interested!

Posted by Russell Blackford at 4:22 am No comments:

At the Dawn of a Great Transition has been published 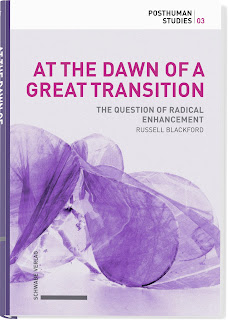 My new book, At the Dawn of a Great Transition: The Question of Radical Enhancement, has now been published by the venerable academic publisher Schwabe Verlag, based in Basel, Switzerland. It is part of Schwabe Verlag's Posthuman Studies series. At this stage, it is available in hardcover and e-book pdf formats. I expect that a paperback version will become available at some point, and at that stage I'll advise. Most people would probably want to get their university libraries to order in the hardback, rather than buying it for themselves, but I won't be ungrateful for personal sales made to sufficiently interested individuals.

At the Dawn of a Great Transition is available directly from the publisher or in the usual ways such as through Amazon.

To pique your interest, the book's blurb states as follows:

"Radical enhancement would employ technology to extend human capacities far beyond anything yet seen or experienced. Imagine, for example, easily outrunning any Olympic athlete while being dramatically smarter than Albert Einstein. Or imagine living for hundreds or thousands of years, making today’s super-centenarians seem like mayflies. Soon – perhaps some time this century – we may have the technology for this. But if we had it, should we use it? Radical enhancement might seem like a gift, but could it become, as its critics warn, a poisoned chalice for individuals and a curse for human societies? In this fascinating book, Russell Blackford examines the pros and cons, bringing good humour, philosophical insight, and historical perspective to this most modern of modern debates."

Posted by Russell Blackford at 7:12 pm No comments:

I recently interviewed A.C. Grayling for the Newcastle Writers Festival's Stories to You podcast.

A little blurb that I wrote about it to pique your interest: Dr Russell Blackford, Conjoint Senior Lecturer in Philosophy at the University of Newcastle, interviews A.C. Grayling about his new book, The Frontiers of Knowledge: What We Now Know About Science, History, and the Mind. Professor Grayling is an eminent philosopher, author of many books, and Master of the New College of the Humanities, in London. They discuss fields of knowledge that have opened up with new methods and tools of inquiry – including cutting-edge physics, humanity’s very ancient history before Greece and Rome, and what we now know about the mind and the brain. Professor Grayling explains how we reached this point and the challenges for future progress in these fields. Their conversation turns to the important task of communicating knowledge to the public, and to the continued need for liberal education and the traditional humanities in a political environment that is often hostile to them.

Posted by Russell Blackford at 9:14 am No comments:

Religion at Work in Bioethics and Biopolicy

With my friend and collaborator Udo Schüklenk, I have a new article in the Journal of Medicine and Philosophy.

Posted by Russell Blackford at 1:28 pm No comments: