A sort of okay piece by Ian Grey on The Avengers

Sort of okay in that he mainly talks about The Black Widow, and what he says about the interpretation of the character is more or less right. But he carries on as if he is the first person, or at least the first male person, to notice how competent she is all through the movie. What he says about this is actually rather obvious, and I touched on it (albeit briefly) myself in my own short review of the movie when I came back from The Avengers the best part of three weeks ago - Natasha kicks butt throughout, when we might have feared that she'd be overshadowed by the bigger, more famous male heroes.

Still, maybe Grey is right that various prominent male critics have missed commenting on the character and Scarlett Johansson's tidy performance. If so, the reasons for their silence might, I suppose, be worth speculating about (however, we could probably come up with all sorts of hypotheses if we started the speculation running). 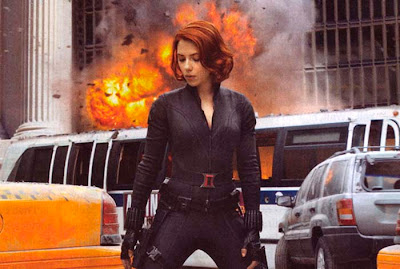 Notwithstanding all this, The Avengers was, let's face it, something of a cock forest. That was  inevitable in some ways, if it was going to be true to the source material. But Joss Whedon's smart and sensitive work with female characters is all the more reason to hope that there are more female characters of some importance in the sequel.
Posted by Russell Blackford at 12:47 am

The problem with introducing any major new character is that they would have to a:turn Avengers 2 into an origin story for this character or b: introduce the character in an entirely different movie they way they did with the other male characters.

That's true, at least up to a point - there are limits.

Still, I think I could write a story in which I weave in a small number of new characters and give enough an idea of their origin. It's certainly a constraint on introducing a very major character or more than a very small number of characters, if the characters need to have explanations of their powers, etc.

An alternative might be to have a movie starring the female character and then have the Avengers movie with her character come after that. There's already precedent for this with the male Avengers characters of Thor, Iron Man, and the Hulk.

Well, all of the X-Men films - even the vaguely rubbish 3rd one - have managed to introduce new characters without feeder films. In fact, they did such a good job that by the time we got the Wolverine origin film, it told us almost nothing that we didn't already know/could have guessed.

That said, I suppose the X-Men writers have the advantage of not having to think up/explain unique origins for all the characters, other than 'um, they're mutants'. But I'm confident that they could slide in, say, Wasp and the Vision without too much chaos ensuing, while bringing in Hank Pym in one of his various guises could create some interesting interplay with both JvD and Banner/Stark. (I doubt they'd have the nerve to go down the domestic abuse plotline, though.)

Personally, I'd like to see Wanda in there too. Maybe it's an age thing, but I always associate her and Pietro more with the Avengers than with the X-part of the Marvel-verse, though I do realise that's where they originated.

I imagine, though not based on any sort of evidence, that Maria Hill (played by Cobie Smulders) will have a larger role in any sequels, filling the now-vacated role of S.H.I.E.L.D. liaison. She got some excellent moments at the beginning in the film and during the attack on the helicarrier.

It'd be hard to get the Vision in at least in the original universe form -- I never really read the Ultimate side -- without bringing in Ultron first, which means you have to bring in Hank Pym first, which would be getting a bit big for this movie. Ideally, you want to have this movie introduce Hank and the Wasp and make Ultron the villain, and then maybe Wonder Man and the Swordsman in the next movie, and then in the next one introduce the Vision after Wonder Man's sacrifice in the previous one. That, of course, is only if you're going to do that many movies.

The Beast would be an interesting addition as well.

For other female members, though, it'd be pretty easy to slide She-Hulk in, either in an Avengers movie or, preferably, in another Hulk movie. It's a pretty easy origin.

Whn I saw there was a link at the end of your article I was shocked to discover it did not lead to a picture of Squirrel Girl. Draw whatever conclusions you will from that.

Hi. Ian Grey here. Thanks for your notice of my piece.

My main interest, in an overview semi-meta way, was to use AVENGERS as a gateway to talking about the stunning blindness of American critics to female
performce which I believe is itself a gateway to the truth of Hollywood --that it may attend liberal parties but in truth is ruinously rightwing and misogynistic to the bone.

Which is why Joss giving Black Widow so much screen and thematic time is, sadly, a hard-won triumph. Now that hes earned Disney 1.5 billion, he's not only upping her allowance but giving Hill her own story and adding another main female Avenger entirely.

So--less of a "cock forrest" this time!