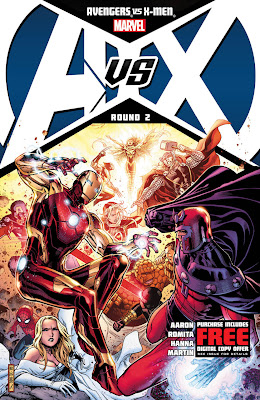 The Avengers vs. X-Men event continues, and has now reached as far as Avengers vs. X-Men #3 (the series will have 12 fortnightly issues). There are also multiple spin-offs issues, including the all-fighting Avengers vs. X-Men Versus (talk about tautology!) series of six issues, plus issues of regular, ongoing series that show facets of the overall event.

The big minuses so far? Well, it's relentlessly plot driven: leading characters on both sides are acting like nutcases, being totally unreasonable and unwilling to compromise. That is certainly the case with Captain America and Cyclops, the respective leaders of the two teams. Wolverine is even worse, in that his solution to the whole problem of what to do about the planet-exterminating Phoenix Force, which apparently wants to come to Earth to bond with the young X-Man, Hope, is simply to kill Hope. Um, apart from the fact that this makes Wolverine look villainous, mightn't it just piss off the Phoenix Force even more if someone kills the young woman that it plans to bond with? As you read this event, you can't help feel that both sides (or all sides, since Wolverine is on a frolic of his own) would be better off talking the problem over and looking for a mutually acceptable solution than wasting their time beating each other up.

The other big minus is that there seem to be all sorts of continuity errors as events covering the same period of time keep getting shown from different angles in different books. In itself, that's an interesting device, but it gets fouled up if we are shown what appear to be irreconcilable inconsistencies - or inconsistencies that can be resolved only by making up stuff of our own.

That said, there's also quite a lot of fun as the two sides try to outwit or overpower each other, with plenty of twists and turns so far (bear in mind that the X-Men are already split into two factions on opposite sides of the continental United States - but Wolverine's faction has mixed sympathies when it to comes to the conflict).

At this stage, the Avengers won their invasion battle against the X-Men when a whole crowd of Avengers attacked the beach of Utopia, the island HQ of the X-Men, from the S.H.I.E.L.D. helicarrier (which is featured so prominently in The Avengers ... the movie). Individual Avengers also obtained dubious victories against individual X-Men.

The highlight here has been an epic fight between Iron Man (Tony Stark) and Magneto (Erik Lehsherr) - two of Marvel's most iconic characters - shown at length in Avengers vs. X-Men Versus #1.

Magneto is generally regarded as more powerful than Iron Man, and has frequently had the better of him in past battles when Magneto has fought whole teams of Avengers. On this occasion, though, things don't go all his way - for Iron Man has come prepared specifically to deal with him, with all sorts of dedicated anti-Magneto technology. We see Tony Stark's power, cunning, and brilliance at work as he attempts to eliminate Marvel's (arguably) greatest villain from the chessboard. But Magneto shows some tactical cunning of his own, plus guts, determination, and enormous raw force. He ends up giving Iron Man a beat-down, until ... something shocking happens to cause big, bad Mags to lose interest in the fight entirely. Result: an unlikely victory for Iron Man, while Magneto drifts around in space (where they'd ended up fighting) muttering that they need to involve his volatile daughter, The Scarlet Witch.

This is all quite well done, surely enhancing both characters' reputations for badassery, though when Magneto "sees" something at an interstellar distance that makes him forget about fighting Iron Man, we are not shown it ourselves, and nor do we get a good reaction shot. All we have to tell us what happened is Magneto's interior monologue in the narration boxes. The ending seems rather rushed and thin.

But at any rate, the Avengers chalk up a few of these unlikely and debatable wins over very powerful opponents: The Thing ekes out a dubious and temporary victory over Namor; Red Hulk gets an even more dubious triumph over Colossus (who has the powers of The Juggernaut and is giving Red Hulk a beating until something happens to make him decide to surrender). The Avengers take over the X-Men's island, and Cyclops surrenders to Captain America on behalf of the X-Men.

And then in Avengers vs. X-Men #3 the momentum is suddenly reversed as Cyclops' powerful Extinction Team turn the tables - thanks to some good work by Magik. It turns out that, off-panel, she has scored a rare win for the X-Men, and managed to take down Doctor Strange. The most important X-Men, including Cyclops, Magneto, Emma Frost, Namor, Magik, and Colossus all escape, apparently no worse for their individual battles, and get a step ahead in the quest to find Hope (who, understandably, has run off by now). Meanwhile, Captain America, who is not a murderer when all is said and done, has a falling out (in more ways than one) with Wolverine, and some of Wolverine's group of X-Men decide to help Cyclops and his faction. Right now, the advantage is with the X-Men.

If you can ignore just how plot driven all this is and overlook the continuity problems, it's amusing to watch those twists and turns. There are some good character moments (Iron Man and Magneto get quite a few just in their fight, with both coming off as intelligent, thoughtful, essentially good men who'd rather not be caught up in this war - and both have been acting so far as voices of reason, questioning their leaders' hardline choices).

Guess I'll keep eating the popcorn and watching the show, though even by comics standards this is one plotline that you can't take too seriously.
Posted by Russell Blackford at 11:57 am

Thanks for the summaries. I've stopped at AvX #2, though I still have a marginal interest to see where this is headed, if only to see how illogical things can get. There are too many great independent (or independent-ish) titles coming out throughout the year that I'd rather support than a transparent cash-grab.

Also, I'm not sure if you have access to any of the Free Comic Book Day stuff, but there's a Bendis-written issue of Avengers that features Wizard and Mad Thinker, usually Fantastic Four villains, that allows me to hold onto hope that Hickman will take over on that title in the Fall. (Also, Ultron is back!)

Haven't seen that, but Hickman would be a good choice when Bendis moves on from the Avengers. And we've been waiting for the next big Ultron story!