Vampires bugging you? Who you gonna call? 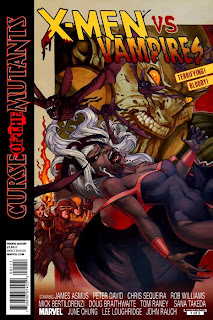 A current X-Men story arc has the recently-expanded, 200-or-so-population mini-country of X-Men, united under the leadership of Scott "Cyclops" Summers, involved in a war against an army of thousands of pesky vampires. Those vampires are pretty tough - you damn sure won't see me trying to fight one - and the odds are bad. But when your vastly powerful arch-nemesis has joined you lately in an alliance, actually signed up on the team, and taken a leadership role as elder statesman, it can give you an advantage in open battle.

Honestly, I thought this whole Curse of the Mutants/X-Men vs Vampires story arc was a pretty silly idea until now, but the X-Men franchise always has a potential for moral depth and ambiguity, especially when the franchise's heavyweight characters are wheeled out into the storyline.

The assault is launched on a vampire stronghold, using a small X-Men team. Cyclops, Wolverine, and Pixie do some damage as vampire slayers. Angel struggles. But the biggest, baddest mutant of all simply exterminates vampires like bugs ... until he discovers that the last one standing in this particular skirmish in the war is an old friend from a very bad era a very long time ago.

So what does he do?

I might actually go and buy some of the stuff from this arc: this little story from the anthology issue X-Men vs Vampires # 1 sent a shiver down my spine. From the previews available, the other three stories in the antho look more light-hearted, but a lot of fun if you have a sense of the characters and can put out of your mind the moral condundrum about killing (if you can kill the undead ... you "slay" them, don't you?) all those vampires. I can't review all the stories for you, but I reckon I'll check them out.
Posted by Russell Blackford at 7:18 pm

Some commenters over at Scans Daily think that the ending is ambiguous. It seems pretty clear to me what Erik/Max does.