A nice interview with Mike Carey 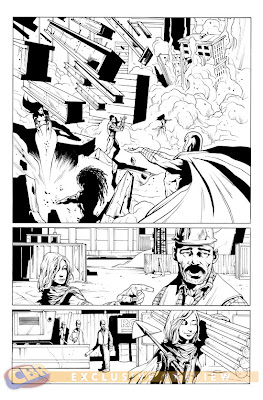 For lovers of X-Men and/or Mike Carey's work, there's a nice interview over here about Carey's current projects, including what is happening in X-Men Legacy (including the "Collision" arc, which is now drawing to a close). Some good times coming with this, it seems:
"X-Men: Legacy" #241 hits stores this week and brings the "Collision" arc to a close. "What I wanted to do in the final issue was to make sure that each of those conflicts comes to not necessarily a resolution, but a head, so all of the major characters in this story get their moment in the spotlight. It's a relevant moment; a moment where they have to make a choice to confront something - whether it's within themselves or between themselves and the people around them. Those moments definitely move their stories and this story a long way forward," Carey revealed. "The plot of the issue will involve both a rescue mission and some fighting with the Children of the Vault. However, seeing as the Children of the Vault are several thousand strong and they're going up against a team of a half of dozen X-Men, things are not going to be resolved by a fight. There has to be another dimension to it. There will still be plenty of action though."

"Legacy" #242 hits stores in November, kicking off a new two-part arc titled "Fables of the Reconstruction," which will be drawn by Paul Davidson ("New Mutants"). "In retrospect, this is a story that I probably should have done before 'Collision' because it follows on and picks up some of the dangling threads of 'Second Coming.' In 'Second Coming,' we saw San Francisco get pretty comprehensively trashed by the battle between the Nimrods and the X-Men. 'Fables of the Reconstruction' is about the ongoing rebuilding of the city. It's being conducted by the civil authorities, but Cyclops is very keen to make sure that the X-Men play their part. There's a sense in which he feels responsible for it, at least in part, but also he realizes that this is a way of reaching out to the human community and showing them that the X-Men don't take their commitment to the area they live in lightly.

"Cyclops puts together a team who are directed to help with the rebuilding," Carey continued. "It's a team of real power house characters: Psylocke, Magneto, Colossus, Omega Sentinel, Danger, Hellion and Random. Rogue and Hope go along also. But things don't go quite according to plan and we end up with a very, very tense and dangerous situation between some of the members of that group."
Posted by Russell Blackford at 7:18 pm

Yet more incentive to get up to date with this! I've also thoroughly enjoyed Carey's Felix Castor novels.