Publicity material for The Australian Book of Atheism 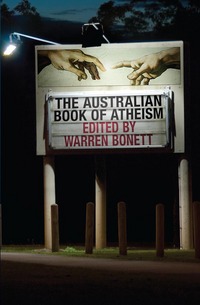 I've received in the post a whole batch of postcards advertising The Australian Book of Atheism, edited by Warren Bonett, appearing from Scribe on 22 November. This contains, among many other goodies, an article par moi, on the subject of freedom of speech. Think of it as a great Christmas present (an even better one would be this book combined with 50 Voices of Disbelief ... but you could guess that).
While prominent international thinkers have made significant contributions to the general conversation on belief and religion, Australians have been less heard.

The Australian Book of Atheism is the first collection to explore atheism from an Australian viewpoint. Bringing together essays from 33 of the nation’s pre-eminent atheist, rationalist, humanist, and sceptical thinkers, it canvasses a range of opinions on religion and secularism in Australia.
With other authors such as Graham Oppy and John Wilkins, this is going to be a strong collection.
Posted by Russell Blackford at 6:11 pm

Is there a contribution from Peter Singer?

How did Wilkin's get a guernsey? Everbody knows he's a militant, fundamentalist gnu agnostic! ;)

I'll be publishing the fall list (I have it here somewhere), but I don't believe Peter Singer is on it.

Singer was invited to write for the book but other obligations and time constraints meant he was unable to contribute.

er, "full list". And thanks for that information, Chrys.