Like all cultural products, the suddenly-controversial ads used in Tourism Victoria's current Daylesford promotion are open to various interpretations. However, they wouldn't work unless the main message was clear: Daylesford, a tourist centre in the Victorian countryside north-west of Melbourne, combines scenic beauty; fine restaurants where you can buy delicious food and excellent wine; the relaxation of the spa baths at Hepburn Springs; and generally a tranquil, yet sophisticated, ambience conducive to flirtation and romantic love. In asking you to "Lead a double life", the ads refer to Daylesford's combination of rustic charm and night-time sophistication, but they also invite you to enjoy the pleasures that the town and its surroundings can offer as a break from your ordinary workaday routine.

If you're a puritan or a prig, that message may be enough to upset you, as it's upset poor Morag Zwartz. (She must have a slow-burning fuse, though, as the ads in question have been running since last year with no controversy until now ... go figure.) 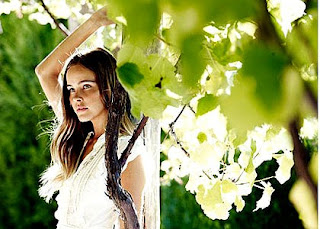 Doubtless there's a lot more that could be gleaned from or read into these advertisements, and certainly the juxtaposition (sometimes fusion) of iconography involving rural simplicity and old-time religion and iconography of sophistication and sensuality lends itself to many responses. The former set of icons is not mocked, but it is certainly treated with a playfulness and knowingness, a kind of po-mo distance, that could offend people who believe that old-time religious values should always be treated with utmost seriousness and respect. There's a fine line here, in these ads, between irreverence and a kind of sentimentality that might itself offend some. I don't believe the ads plunge dramatically in either direction, but it's risky, and any event, traditional forms of asceticism and religion-based simplicity are, indeed, in the upshot, somewhat subverted as values.
The advertisments are, of course, appealing to other values: the values of sensual experience, sophistication, delicious food, flirtation, and romantic love. Given the pitch being made, the sort of demographic it seems designed to appeal to, and the aspects of Daylesford that it highlights, those other values are clearly relied upon and reinforced.
Contrary to Zwartz, I'm here to say that there's nothing wrong with that. These are all legitimate values. Sensual experience, sophistication, delicious food, flirtation, and romantic love are all part of a good life as judged by the standards of ordinary human flourishing. They are some of the things that can make life worth living when it otherwise seems like a grind (not the only things, of course - e.g., there's also art, science, and ordinary kinds of close, non-romantic friendship). If an advertising campaign tends to promote these worldly or pagan values, then as far as I'm concerned that's a good thing, and the campaign's creators needn't look constantly over their shoulder to see whether someone else who disagrees, perhaps some literal-minded, religiose prig, might be offended.

Obviously the "lead a double life" slogan and other aspects of the ads play off traditional ideas that these good things - delicious food and the rest - are to be deprecated, even treated as sinful. The contrast of the simply-dressed young woman walking barefoot along the country road with the same young woman enjoying the sensual pleasures of the evening creates a visual as well as verbal pun on the idea of leading a double life ... but of course, what is being marketed here is not literally deception (sexual or otherwise) but just ordinary things that most of us have reason to value: just the ordinary good things that we might happen to find in an attractive tourist destination.

Zwartz's angry rant in the National Times not only misses the ad campaign's cleverness and humour, and proposes, rather unreasonably to say the least, that the campaign be withdrawn with an apology. More than that, there's a strong note in her piece of tut-tutting disapproval of the values being promoted, which she reduces to greed and "lasciviousness". She concludes that the ad's message: fouls the concept of a civilised and decent society, and offends in the most egregious way one of its oldest religious communities.

Which leads me to a more general point. So often, religion asserts that there is some kind of transcendent good beyond ordinary human flourishing - and that ordinary human flourishing, with all the worldly pleasures and satisfactions involved, is something to be deprecated. That wasn't the attitude of ancient pagan polytheism, but it is very much the traditional attitude of Christianity and other more modern religions.

In this sense, modern religions do, indeed, tend to "poison everything". All too often, they treat the ordinary goods that are available to human beings as if they were worthless or even wicked. When it does this, religion does dirt on ordinary human flourishing. At least we can thank Zwartz for providing us with a nice example.
Posted by Russell Blackford at 4:29 pm

Everyone is probably familiar with this but this quote is what I always think of when puritans are on the case:

"puritanism, the haunting fear that someone somewhere might be happy."

The suppression of sensual pleasure seems like a full-time mission for some folks, and it's something that must be resisted at every turn.

Of course, religions don't have an absolute monopoly on killjoy asceticism: perfectly reputable movements like feminism, environmentalism and socialism have their anti-sensual wings as well (though, especially in the case of feminism, I think it's often grossly exaggerated).

But hey, let's be honest, we can console ourselves with the irony that many of those pleasures are lent an additional frisson by the knowlege that somewhere, some Mrs Grundy figure is being driven to apoplexy by the mere thought of our fun!

Well, I've never heard it called that before.

In a world that has as much poverty, war, and stupidity as this one does, I, for one, am revolted by the kinds of selfishness being upheld, in this piece, as virtuous. All a person needs is enough food and enough sex to maintain a descent level of mental and physical wellbeing. Anymore than that can't really be justified in normal circumstances, because there are too many problems that need to be solved and such indulgences steal our attention away from what is important. So, this commercial simply would not appeal to a morally serious person (what's a morally serious person sitting around watching commercials for anyway?). I am an atheist and utilitarian, by the way.

By all means give money to the poor rather than going to an expensive restaurant - though I think there's a lot to be said for doing the latter now and then and for being glad that fine cuisine exists. But anyway, how on earth does having "more than enough" sex harm the poor? Do you mean you really want to go through life rationing yourself to only a certain amount of sex so there is more time to worry about other things? Frankly, I think that's pathological. Would you say the same about all your other interests - sport, or reading philosophy, or listening to music?

I think you're an atheist who has been socialised into religious morality. You should put it behind you.

Sometimes supporters of those you criticize will visit your blog and post replies under a pseudonym, and then tack on a claim of atheism (and/or utilitarianism) right at the end to have their contrary views given serious reply. Don't fall for it. It's the "I agree with your opponent/by the way, I'm one of you" trick.

Perhaps I'm mistaken in this case, although there's no way to know for sure. But "morally serious"? 'Jason01' clearly seems to think there's a right and wrong way to be human.

There's actually a book that you can read to learn how to go around life with an air of moral superiority like Jason01. It's the Bible. Ringing endorsement.

I must assume then, Jason01, that you are posting from a public computer, say in a library? I mean, why on earth would someone need their very own internet connection? Surely that's wasteful, if one can go to the library. But then, why read blogs, or surf the net at all? Why not spend the time one would normally spend reading blogs and commenting on them working in a soup kitchen? Surely reading blogs isn't a past time that can be justified in a world where tens of thousands of children die every day from starvation and other preventable diseases such as dysentery?

Even if one were a utilitarian and applied those values to oneself, it would be negligent to pretend that no-one else had a different set of values and, in attempting to understand and shape the world to maximize happiness, it would be necessary to be aware of the origins, shaping and operation of those values. A couple of examples would be awareness of advertisements such as these and of the amusingly prudish reaction. Also, I think fucking increases human happiness on the whole.

>In this sense, modern religions do, indeed, tend to "poison everything". All too often, they treat the ordinary goods that are available to human beings as if they were worthless or even wicked. When it does this, religion does dirt on ordinary human flourishing.

Ancient religions which still matter today arose in our default state of poverty, so this attitude probably reflects a necessary adaptation to bad living conditions. Religions which arise in more prosperous times, for example, Mormonism, seem to take a more benign view of worldly goods. From what I've read, Mormons even believe that Jesus had a few wives, and presumably a married sex life with them, during his earthly existence.

1. I'm sorry, but I simply didn't say or mean anything Mr. Blackford said I said and thought I meant. I must say I don't think I was that unclear.

2. He thinks I've been 'socialized into religious morality.' I think he has conformed to the lazy, relativist, pseudo-liberal rhetoric of popular culture. And I think he should stop it.

1. Sometimes people would rather have paranoid suspicions about a poster's authenticity than confront ideas & facts they find unwelcome.

2. The only air around here is the hot stuff of your insults.

How I happen to behave does not determine what I think is true. I'd rather be a hypocrite than a delusional egotist any day of the week.

Re. What Anonymous (12 October) said

I agree wholeheartedly on all points.

This is a very stale thread, now, but yay for what the pope would mistakenly call "the lazy, relativist, pseudo-liberal rhetoric of popular culture." It has a lot to be said in its favour. The thread is now getting old, so comments closed from here on. I'm sure the issues will come up again.