Sunday supervillainy - some responses to the Northstar/Kyle wedding 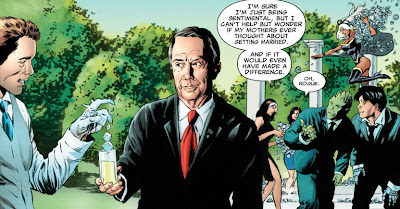 Chris Coffey of the NYC Mayor's Office of Media & Entertainment spoke with CBR News about the move and what New York hopes to achieve in participating in the historic issue. "We've had this partnership with Marvel that goes back to the special edition they did of Peter Parker trying to find a job with some of the city resources that were available. The city was really pleased with the partnership and thinks Marvel is a great corporate citizen," Coffey told CBR. "So from the city's point of view, we're always looking at new ways that we can get a message out -- whether that's through more traditional ways like television, radio, newspapers, blogs and digital media or others. And this presented a real interesting way to get a message out to folks.


A more villainous response comes from an organisation called the National Organization for Marriage.

Brian S. Brown, whose five-year-old nonprofit group is dedicated to fighting same-sex marriage, is troubled not just by the Marvel comic depicting the wedding of Northstar and Kyle Jinadu but by the real-life ceremony it inspired at Midtown Comics in New York City. However, Brown, whose job is to help ensure state legislatures don’t pass marriage-equality laws — or if they do, that they’re overturned by ballot measures — isn’t bothered by the wedding of two men, either fictional or real. Heck, he even wishes Midtown couple Scott Everhart and Jason Welker well, offering a not-at-all-condescending “bless him” to the former.

So it’s not that; oh, no. It’s the crass commercialization of the whole thing.


Yeah, yeah, okay. You can follow up for yourself what Brown has to say about all this in his original piece. Another sample to, um, whet your appetite:

A comic book shop in New York City spotted a commercial opportunity, a chance for some nice publicity, according to LifeSiteNews.

They decided to fund an all-expenses paid wedding for two lucky guys, in their comic book store.

No, I'm not making this up.

Scott Everhart, bless him, at 39 years of age, saw an opportunity of his own. He applied online to win the comic book store wedding prize—and waited to tell his partner Jason until he was asked by the store to come in for an interview.

"That's when I broke the news to [Welker] and kind of proposed at the same time," he said.

After the ceremony the store sold copies of Astonishing X-Men No. 51, which features Northstar and Kyle tying the knot.

(Same-sex weddings are becoming commonplace in comic books, from Archie to X-Men. Batwoman—originally a love interest for Batman—has become a lesbian.)

Why am I telling you this story? I don't know Scott or Jason and I wish them both well.

Somewhere there may be some foolish man and woman getting married in a comic book store. But nobody else is paying for it and nobody in the media is covering it.

Are we really supposed to believe in the "sanctity" of gay comic book weddings?

I wonder if Brown is correct in his description of Marvel comics as "children's literature". The medium age of computer gamers, at least, has gone up quite a lot in the last ten-twenty years, and I'd guess the same has happened to the audience of superhero comics. Not that it makes much of a difference in this context.

I expect that the average age of comics readers is now a lot higher than when Brown was a kid (for whatever that's worth, as you say).

With a name like Thor Parker, what other kind of shop was he going to run?