Sunday superstuff (no villainy this week) - More on Northstar's wedding 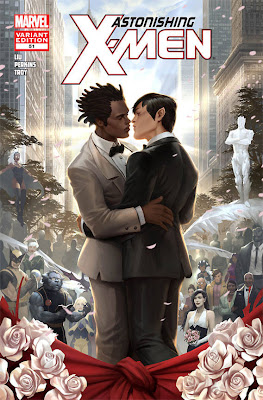 Gay superhero Northstar (the white guy with the pointy ears, for those who are not familiar with him) gets married to his boyfriend, Kyle, in Astonishing X-Men #51 ... in the latest expression of support for the gay community from the comics industry, and specifically from Marvel. There is a preview here, with some nice images.

Given that same-sex marriages can now be legally recognised in the state of New York, it's more than appropriate for the comics industry and medium to be showing a same-sex wedding in New York City. Partly, Marvel is celebrating social progress in the real world, however hard won (and fiercely opposed) this progress is turning out to be.

Let's hope that the gains can be held in the real world, even as they're reflected in fictional worlds.

The wedding itself looks cute, with many of Marvel's characters from the X-Men/mutant side of the Marvel Universe shown as in attendance. I wonder whether we'll get villains invading festivities as happened way, way back when Reed Richards and Sue Storm got married (surely Marvel is more sophisticated than that these days!).

As a nice touch, it looks as if Northstar's sister, Aurora, is going to be acting in something like the traditional "best man" role, providing the rings and generally tidying her brother up and sorting him out. I look forward to seeing all this artwork with dialogue so we can find out exactly what is going on. But yeah, it looks like a lovely wedding! 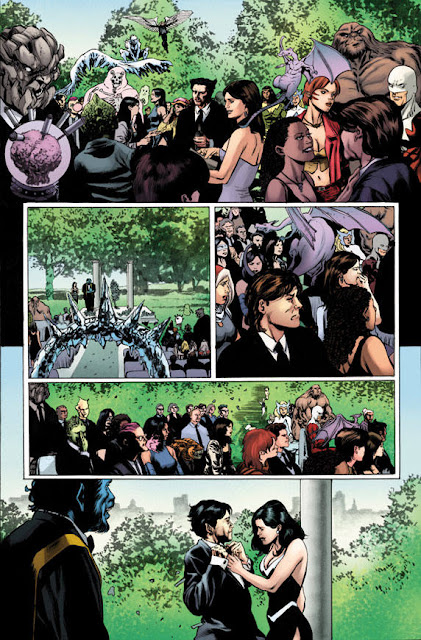 Posted by Russell Blackford at 2:44 pm

Could we please have some more posts on abortion?