Sunday supervillainy - Week of the Witch continues PLUS ... Captain Marvel returns (in a sense)

More here about Wanda Maximoff ... and here ... and here. This whole "Week of the Witch" thing, plus the role that seems laid out for The Scarlet Witch in the upcoming X-Men vs. Avengers event, constitutes a big push for the character, so I'm hoping it signals a return to her status as a major figure in the Marvel Universe.

That's largely because The Scarlet Witch has been one of my favourite comics characters since I was a kid, but also because Marvel really needs to invest in its major female characters.

Meanwhile, I'm not entirely sure what I think of this development. There is currently no character in superhero comics called "Captain Marvel" - though Marvel Comics owns the name as a result of some complex legal ins and outs in past decades. Thus the original Captain Marvel character, created by Fawcett Comics in 1939, and later owned by DC, can no longer be depicted or promoted with that name.

Marvel's own Captain Marvel character (created in 1967) was killed off in a classic story, The Death of Captain Marvel in the early 1980s, and has never been "brought back to life" in any ongoing way.

It seems that Marvel Comics has now decided to fill the gap by renaming a high(ish)-profile character, Ms. Marvel, as "Captain Marvel" ... and promoting her under the new name in a new ongoing book (at the same time, I see, giving her a less blatantly sexy costume). There are some good aspects of this, but I'll miss the name "Ms. Marvel": the character, Carol Danvers, had established an important place in the Marvel Universe under that superhero alias, as well as developing an iconic look of her own. Overall, I hope the new move succeeds commercially - even though it will be a wrench at first - mainly for the same reason as I gave with Wanda Maximoff, that Marvel needs to invest in its major female characters. 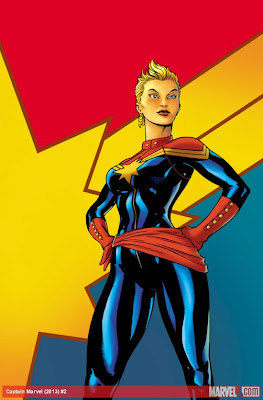 Posted by Russell Blackford at 1:41 pm

I'm pretty excited about this change. When New Avengers and Mighty Avengers launched, Ms. Marvel quickly became one of my favourite characters. If there is one character that Marvel should invest in to become as iconic as Wonder Woman, I'd say it's Carol Danvers.

I remember when I was kid, not knowing much about anyone beyond Spider-Man and picking up Avengers Annual #10 (guest-starring the X-Men! Spider-Woman! And a mystery guest!). The myster guest was Ms. Marvel, stripped of her powers and memories by Rogue in her first appearance.

When Danvers got some of her memories back she confronted her former Avengers teammates about their failure to protect her from a godlike being who grew in her womb, and transported her to Limbo under a spell to love him. The scenes were pretty shocking to me as a kid, that this superhero was telling off all the people she trusted and the end of the issue had such a melancholy note. That's what got me reading Marvel.

I think the redesign with Carol as the Captain is a smart move. Less sexy swimsuit, more retro-future military. My only hope is that they don't send her into space all the time: she's so human, I want to see her rallying the superhero troops on Earth. And I want to see Jessica Jones' reaction to the new duds!

Hey, it's good to see some enthusiasm - totally no need to apologise!