Sunday Supervillainy - Week of the Witch 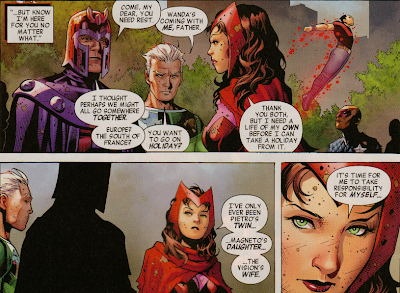 The mini-series Avengers: The Children's Crusade has finally ended, with the main upshot that one of my favourite characters in the Marvel Universe - the Scarlet Witch - is back as a (potentially major) player on the board.

Marvel has now announced that next week will be the Week of the Witch, as they highlight the character in all her dangerous glory in the lead-up to the next big event (Avengers versus X-Men). You've gotta love Wanda Maximoff, the Scarlet Witch!

Posted by Russell Blackford at 2:25 am

I'm going to do my best to ignore the AvX event. The rumor is that Bendis will leave his Avengers books and go on to at least one, possibly several, X-books afterward. If he goes over to Uncanny and Adjectiveless, that's fine, since I'm not reading those anyway. And with Hickman leaving the Fantastic books in October, there's an outside chance he could pick up an Avengers title (though he'll also be busy with two Image books--check out Manhattan Pojects, btw?).

Bendis really divides people, doesn't he? I can take him or leave him, but a lot of folks do have very strong opinions one way or the other.

Maybe the problem is that he's on so many damn books. Maybe he should just focus on Ultimate Spider-Man and one other.