Currently reading - Attack of the Theocrats by Sean Faircloth 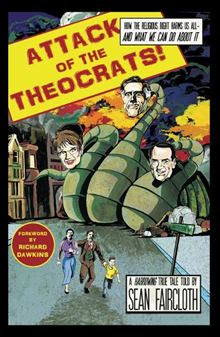 I've been reading Attack of the Theocrats: How the Religious Right Harms Us All - and What We Can Do About It, by Sean Faircloth. As a book written in defence of secularism, it's of particular interest to me - especially since it has appeared at almost the same time as my own Freedom of Religion and the Secular State, which deals with a similar topic.

I've read a number of reviews of the book by friends and colleagues, including a brief one by Jerry Coyne that forms part of a more general post on Faircloth's activities. I can endorse this para, which forms the main part of Jerry's review:


The book paints a scary picture of how, despite America’s official policy of church/state separation, our laws and our legislators are still deeply imbued with irrational religiosity. (Read his summaries of the 50 most religiously insane American senators and representatives.) It’s also very eloquent and convincing about how the “Founding Fathers” of America—people like Thomas Jefferson, James Madison, and Benjamin Franklin—were by no means religious, but were at best agnostics, and certainly did not form the U.S. government on Christian principles. That’s a must-read section if you want to go after the common religious claim that “America was founded as a Christian nation.”

Jery also has some mild criticisms. One is that "his [Faircloth's] prescription for how to create a secular America seems appears to consist almost entirely of helping the SCA [the Secular Coalition for America] or donating money to it" - which is a bit unfair to Faircloth. The latter does, indeed, ask us to support the SCA (most specifically on page 132), but he also sets out clear objectives and policies that he asks readers to embrace. If he succeeded in getting a significant number of readers to adopt some version of these ("some version" because I don't claim that the objectives or policies are perfect; obviously, readers ought to think about them), he'd have performed an important service for secularism.

Jerry also suggests that the chapter on sex is "a tad excessive, almost obsessive". Hmm, I was expecting to disagree, given the opinions I am about to express. But to my surprise, I don't entirely. Jerry has a point here: the chapter really could have done with a bit of editorial tightening up.

On the other hand, and more importantly, I actually applaud Faircloth for taking on this controversial issue. Faircloth states clearly, and shows in some detail, that one of the greatest problems with religious morality is its miserable and officious attitude to sexual pleasure. That's a good thing to emphasise - and a brave thing to say, when so many non-believers appear unwilling to take such an unequivocal pro-sex stance. If the result is a chapter that contains a bit of repetition and other such looseness, that's not so terrible. The reader still gets a good deal.

Unlike Freedom of Religion and the Secular State, Attack of the Theocrats is not a philosophical examination of the issues. It does not try to produce a principled and unified philosophy of secular government, but it is none the worse for that. The book has enough to say about history and legal principle, while being mainly a political manifesto.

It is a call for political resistance to the theocratic directions in contemporary America (by which I mean the USA). In providing this, Faircloth supports his case with numerous dramatic examples of religious privilege in the law, and of politicians who believe it's the role of the state to impose the moral canons of their particular religions. Usually these political miscreants adhere to some kind of evangelical protestantism, but often it's conservative Catholicism that motivates them - these are now often allied in the political sphere. The specific, vivid detail in a book like Attack of the Theocrats is most useful; I'm glad to see so much of it in one handy place.

I don't doubt that Faircloth's book will help many people. With its practical emphasis and easy journalistic style, it fills a niche that my book does not pretend to (though to be fair to myself, Freedom of Religion and the Secular State is also written in an accessible way, and it does investigate what we should do about actual issues that confront us today). You could do a lot worse than read both books, as they tend to complement each other - and there's little actual disagreement between them. They help fill out a complete picture of secularism and its opponents.

One thing that they have in common is that neither is actually an anti-religious book. While my positions in Freedom of Religion and the Secular State would be rejected by many religious people on theological grounds (so I could not persuade them without first persuading them to abandon some deeply-held theological premises), many other religious people could embrace its premises, arguments, and conclusions from within their existing views of the world.

My arguments do not in any way depend on such claims as that there is no God or afterlife. They depend mainly on a model of the state similar to Locke's, and the arguments for this model could be accepted by many, and perhaps even most, ordinary religious people in Western countries.

Something similar applies to Attack of the Theocrats. Though Faircloth is critical of much religious morality - not least in the chapter on sex - there is little or nothing in the book that could not be accepted by a large percentage of Christian believers (and probably believers from many other religions).

Thus, the book is not aimed solely at atheists, agnostics, religious sceptics, and the like, but evidently aims to convince anyone who potentially sees merit in separating church and state ... and anyone who is concerned about the excessive kinds of religiosity that Faircloth reveals and describes. Some people will, indeed, reject his underlying assumptions on theological grounds. After all, some theologies do insist that the state has a broad role in imposing the (specifically religious) "moral law". But many believers will have no great problem with the author's arguments, and could be persuaded to support his proposed goals and policies.

That's just as well, because the political environment must be changed now, not at some remote time in the future when religion has largely vanished from a country such as the USA. I'm fully on-side with criticising religion - and I've defended this strongly against accommodationists and the like, who object to our doing this. But we also need to persuade a large block of people to give their active support to ideas of secular government, whether they are personally religious or not.

Faircloth's efforts will contribute to that, and I support them.
Posted by Russell Blackford at 9:53 pm

And yours and Mr. Faircloth's books are certainly quite timely given the results of a recent PEW poll showing that the number of people who see too much religious talk by politicians is at an all time high:

I am 60% through Faircloth's book and I agree with your (and Coyne's) reviews.

What I think Faircloth's book and Greta Christina's recent "Why Are You Atheists So Angry?" are doing is something no other book has: tug the heartstrings. No one should be able to read about the suffering that religion is causing and swat it away like a fly. Although, many people have known about Jehovah's Witnesses avoiding blood transfusions for years, but most people are quick to label *them* as a sad cult. And, of course, the molestation scandals of the Catholic Church have not destroyed Rick Santorum's chances at a presidential nomination.

It might be worse than we thought. It might be that religious people are aware of the harm religion does, but they're so indoctrinated to shake the cobwebs out or too apathetic to care. Whatever it is, it's the same poison that makes a pro-lifer a proud gun owner.