The politics of Hulkling and Wiccan 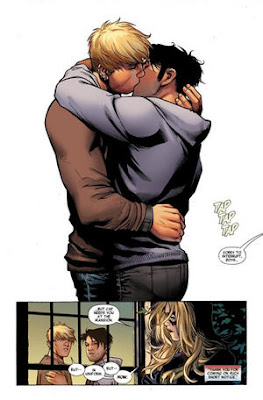 While we're discussing same-sex marriage in the very same week that we're using to follow Marvel Comics' "Week of the Witch" (its focus this week on The Scarlet Witch, who has finally been returned to as a player in the Marvel Universe) ... here's an article by Brett White that combines these themes. White discusses the relationship between The Scarlet Witch's son, Wiccan, and his boyfriend, Hulkling.

In Avengers: The Children's Crusade # 9 we are shown a passionate kiss between them for the first time (not their first kiss, as is clear from the story, but the first time such a scene has been shown with them). Then Ms Marvel interrupts at the window ... oh well.

How do the politics of all this play out?

Extract (from the end):


When I see a gay couple kiss in a superhero comic book, I wonder if it's going to get protested. I wonder if the comic is going to get tons of hate mail. I become hyper-critical of the kiss and put way too much thought into whether or not they are characters or caricatures. I wonder if there were meetings with executives in stiff suits, discussing how big the panel should be and how advertisers would react. I wonder if anyone on the creative team felt awkward about drawing, inking, coloring or lettering a page showing a couple of dudes expressing their love for each other. My sexuality has been politicized to the point where I can't read a kiss between two fictional characters without thinking every insane thing I just listed. And yes, I think all the things I think are insane, because Marvel and the creators have given me no reason to doubt their sincerity. But I've seen bigotry on television, in comic book letters pages and in my own life. Even though the comic book industry has been incredibly supportive of the LGBT community and has made great strides towards diversifying their characters, I still let the words of the people currently vying for the Republican nomination spoil what should be a celebratory, progressive moment.

I'm glad that Hulkling and Wiccan kissed. I'm glad that comic books are now regularly depicting diversity. It's important to know that the gender of the kissers should not be news. It's two characters kissing, and that's awesome (as long as you think those two characters are right for each other, like Kitty Pryde and Iceman -- yep, I went there). But also keep in mind that right now, in 2012, the world at large is not necessarily so accepting, and there are politicians running for president on the promise of nullifying same-sex marriages if elected. Comic books are leading the progressive charge right now and I just hope that the rest of the world can catch up. When I read my comics, I want to stop worrying about the underlying politics; I want to start being happy for the characters.


(I disagree about one thing, though. Kitty Pryde and Iceman? Don't kid me - she totally belongs with Colossus.)
Posted by Russell Blackford at 2:25 pm

She totally belongs with me!

Hey, my readership includes at least one Kitty Pryde fan. Good to know!

Despite this being an impossible argument (since neither side can convince each other, although one side is morally and philosophically correct), I'm commenting anyway.

The fact that this is in a comic book, which is primarily read by kids/teens (and adults that have nothing better to do), is frankly disgusting. It's the promotion of being gay that is so sickening. If someone wants to pervert what is natural by being gay, then let them, but there is no need to promote it. There is such a thing as preserving the youth (although their mostly gone in that sense). Russia's figured this out, maybe it's about time we did.

Well people, you can see that we have a homophobic bigot commenting here. I'm not likely to allow more comments of this nature to be posted, but I'll leave that one alone just to remind us of the attitudes that we are up against.

"The fact that this is in a comic book, which is primarily read by kids/teens"

What's the other 98%? The silent minority?

Hush, Rob, math is only one of many valid Ways Of Knowing. Bobblegopinology makes it clear that Simeon is correct.

The homophobic bigot made a further comment. As foreshadowed, I deleted it.

Thanks Mr Russel Blackford for kicking the bigot! So many teenagers commit suicides because they feel so different. Of course showing 2 guys kissing won't change everything. However it will help a bit. Gay people exist in our society, it's completely normal to see that in comics.
When i was a teenager, it would have helped me to see gay characters as super heroes.