On the Virgin Birth 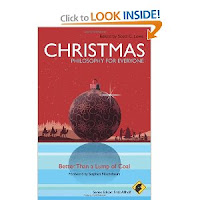 Christmas: Better then a Lump of Coal begins, after preliminaries (a foreword and an introduction), with two essays on the alleged Virgin Birth of Jesus.

Both of these are well worth reading. I expect that most of my readers will, like me, find the second rather irritating, but it still merits careful consideration - not because it will convince you of the Virgin Birth, but because it at least provides a clear summary of what can be said in favour of the doctrine, and because it gives an idea of where you'd have to start from to give the doctrine any credence.

But I'm getting ahead of myself.

The first essay in the book is entitled "Jesus, Mary, and Hume: On the Possibility of the Virgin Birth", written by Zachary Jurgensen and Jason Southworth (both are graduate philosophy students at the University of Oklahoma). I don't think you could do better than this essay if you're looking for a relatively brief and very cogent account of why we should not believe the proposition that Jesus was born of a virgin. The authors delve into the biblical sources, discuss epistemological issues relating to miracles, examine the evidence with sceptical eyes, and conclude that it is very weak - non-existent by our usual standards if we're not already committed to accepting the authority of a church or a holy book. As the essay's title implies, a fair bit of time is spent on Hume's famous discussion of miracles and just what it would take before we believe such stories.

I won't steal all the essay's thunder, as some of y'all will (I hope) want to track it down and read it for yourselves, and besides I would end up with a very long blog post if I tried to do the argument justice. But we are confronted with a situation where the oldest "evidence" we have is the the appearance of two rather different accounts, in the Gospels of Matthew and Luke respectively, which are not even found in the earliest of the extant gospels: the Gospel of Mark. Matthew and Luke were written long after the events that they depict, and in any event the stories can only be based on hearsay (how could anyone know that such events happened other than by a chain of communications from the original Mary and Joseph, if they even existed?). Okay, I've already said too much, and I've started to put my own spin on the essay and the evidence. The essay deserves reading for itself.

The second essay, entitled "The Virgin Birth: Authentic Christmas Magic", couldn't be more different. It is by Victor Lyons, a conservative theologian based at a Christian college in North Carolina. Lyons sets out to defend the doctrine of the Virgin Birth, though he does not reply directly to Jurgensen and Southworth (note that there's absolutely no reason why he should have; presumably the two essays were written simultaneously and independently).

Lyons defends the doctrine, but I doubt that what he says will cut much ice with anyone who is not already a committed Christian (or perhaps a Muslim, since Islam also holds that Jesus was born of the virginal Mary). The difficulty that he faces is that the evidence really is pretty much non-existent, judged by our usual standards of what we'd count as evidence for such extraordinary claims. His essay is a more an exercise in why the faithful should not abandon this particular doctrine or see it as a stumbling block. He wants his readers to embrace and celebrate what he regards as "authentic Christmas magic".

Seen that way, as essentially a pep talk for the faithful, Lyons' piece does a good job, and once again it's interesting to see what its author has to say. He scores some good points, such as showing in detail that the doctrine is well-entrenched in Christian orthodoxy and is very old (he's probably right to say that it pre-dates either Matthew or Luke, though this doesn't entail that it goes back to a time close to Jesus' death, supposedly about 30 CE). Some of the essay seems to be trying to show that the stories in Matthew and Luke are reconcilable and psychologically plausible. That is open to argument, but even if it were true - which I rather doubt - it would go nowhere near showing that the event actually happened.

In the end, you might have reason not to throw out the doctrine if you already (for whatever reason) have an epistemological position that is soft on accepting miracles and allows you to give credence to church traditions and holy books. Otherwise, however, the evidence that the Virgin Birth actually happened is so thin as to be, in effect, non-existent. If someone tries to convince you, through historical evidence, that the Virgin Birth took place ... and then tries to convince you that that event, in turn, provides evidence for the existence of God and the truth of the Christian myth system  ... well, it will fail. Even Lyons doesn't take that tack, and a reading of the Jurgensen and Southworth essay shows why it's not really open to Christians to argue that way.

Even if you're a hard-nosed atheist who will find the Lyons essay irritating, it's worthwhile seeing just what he is able to say in defence of the Virgin Birth, and to compare these two very different essays. Both are clear and well-structured, and I'm glad to have had the chance to take a look at them.
Posted by Russell Blackford at 11:52 am

An oldie, but unlike some old ideas, it never seems to lose its relevance.