On saying no to the burqa 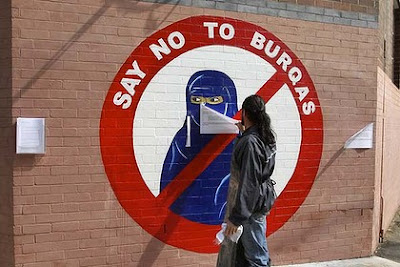 According to The Sydney Morning Herald, Sergio Redagalli, the artist who created the image to the left, is currently under attack for alleged breach of anti-discrimination law.

Again and again, we see these sorts of attacks on freedom of speech and expression where it involves criticism or just plain rejection of religious or cultural practices. It's way past time to push back and defend the important freedom to speak out against these things if we disapprove of them.

As far as I'm concerned, the important issue is whether or not the burqa should be banned, not whether or not people should be legally entitled to express their opposition to it. For essentially Millian reasons, I don't favour a sweeping ban on wearing of burqas in public places (I'll be saying a fair bit more about the pros and cons in The Book). However, this garment is something unpleasant that we should tolerate, not something that we should approve of or welcome. It's certainly not something so precious that it must never be criticised or exposed to expressions of hostility.

And once again we see "Islamophobia" used as a stick to try to deny people freedom of speech. It's appalling, though not unexpected.
Posted by Russell Blackford at 1:43 pm

It may be their right to choose to wear it, although I wonder how "free" that choice may be. How many women are wearing burqas and hiding bruises and damage from the beatings commanded in the Koran.

There is a real concern for Muslims having true civil rights violated because of bigotry amplified by 9/11 fearmongering; however to see any discussion of issues such as this squelched is a danger greater than bigotry.

Do I get to wear a ski mask in Newtown if I visit? I know there are Thieves who actually steal, but as a moderate Thief, I have to say that some xenophobe shouldn't be allowed to do this. At this rate, I will have to pass a defamation of mask-wearer-ideologies resolution in the UN with the help of my moderate Ninja colleagues.

It seems to me that there are two basic reasons to dislike the burqa, as a symbol.

The first is negative: it's a symbol associated with Islam. This reaction is pure Islamophobia - yes, there are many terrorists in the world, and many of them are Islamic (especially in this decade). But the vast majority of Muslims - esp. Muslims in Western countries - aren't terrorists.

The second reason is more positive: the burqa is a symbol of cultural oppression of women. However, banning the burqa won't free these women - showing support for those women who chose by themselves not to wear it, and making it clear to the men in their lives that abuse and coercion isn't tolerated, seems the way to go. Forcing Muslim women to not wear the burqa is just as much an intrusion into their own self-determination as forcing them to wear one.

(There is a specialised area of "don't wear things that hide your identity" - e.g. no motorbike helmets in a bank. These are non-discriminatory, by nature0

It is oddly funny to me that we allow and manufacture for our young children, clothing of a highly sexualized manner, so much so that it can be difficult to locate alternate clothing beyond a large sack--and no one really says anything. And yet, there is hyper focus on this one particular bit of clothing, as if a bit of cloth carries every hate, every desire, every wish and thought about a people, much of which is focused much upon those who differ in society like the extremely abusive types who would be the way they are no matter religion or dress. There are many things that drive oppression. Perhaps clothing is the least of these...

My view matches Robert's. His seems a sensible way to break down the issue.

Culture-specific garb can elicit prejudice, so if we value pluralism we focus on tolerance. When it implicates gender-inequality, we privledge human rights and therefore educate on discrimination.

Robert, you write as though "Islamophobia" is a bad thing. Are you one of those people who can't tell between race and culture/ideology? Let me see what other ideology gets bad press... Communism. Yes, many terrorists in the past have been Communist, but the majority of Communists are not. I am an Indian citizen in an elected-Communist-ruled state in the south. (No No-True-Scotsman please.) I personally know scores of non-violent, pacifist Communists here. Yet, people who wouldn't be caught dead criticising Islam for fear of offence easily say things like "I don't like Communists". I am not a Communist, but I know double standards and fear (real "Islamophobia", if you like) when I see it.

Looks like a lot of missing the point here to me. This guy is a painter-guy, not a military dictator-guy. He wrote on a wall that he doesn't like burqas; he didn't fire all muslims from his megacorp, or send out his minions to revoke their driver's licenses.

"Breach of anti-discrimination law" how?