Here's some stuff about this forthcoming X-Men storyline by Mike Carey set in a desolate alternative reality where, for reasons yet to be explained, the X-Men (and the Brotherhood) never came into existence and the situation of mutants has become even more dire than we see it in the main Marvel diegesis. 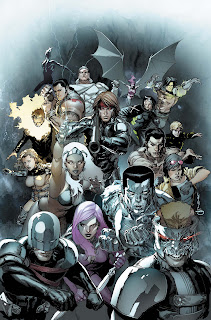 Most of the characters and costumes have been redesigned for this alternative version of the Marvel Universe, many in ways that are much grittier - more punk, hardore, or, y'know, industrial - than what we're used to. I wouldn't be sorry if some of the new look infiltrated the mainstream books. We're also promised that this is not just an alternative reality: there will be some kind of effect on the regular continuity of X-Men (hopefully more so than the massive 1990s Age of Apocalypse event, where the only pay-off for the main Marvel continuity was that a few characters managed to cross into it from the AoA timeline).
There's a prologue book, Age of X: Alpha, in January, followed by six main instalments over February-April, when Age of X will take over the X-Men Legacy and New Mutants titles, and a couple of other supplementary volumes. Nine in all. That's a fairly small-scale event, as these things go, but enough room to develop an alternative version of things in some detail. I'm looking forward to the event and the ultimate pay-off.
And by the time it's all over, the new X-Men movie will be getting close to its release date - some time in about June, I gather. But that's a topic for another year.
Posted by Russell Blackford at 6:08 pm

I know it's not very civilized of me to admit it, but I'm particularly fond of Storm's new uniform.

I'm sure that Storm's costume, as shown here, will be very popular with certain demographics. ;)