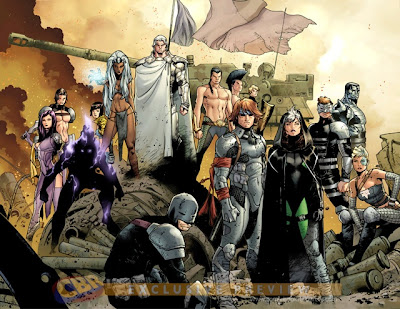 Can you identify everyone? I originally thought the guy crouching at the front was the supervillain Avalanche, who can cause earthquakes and stuff, and wears a similar costume in the main Marvel continuity. But I'm now thinking it's probably Wolverine in an armoured costume. I hope not: it would be fun to have a relatively obscure character like Avalanche on the team, whereas Wolverine is horribly over-exposed.

Most of the other characters are obvious, even when redesigned, but a few I'm not sure about. Some will have new names in this alternative continuity - e.g. the Cyclops character near the right is apparently going to be called "Basilisk", while this world's Rogue,who is very recognisable with a green costume and her trademark skunk-stripe hair, is apparently going to be known as "Reaper".

I love the redesign of Dazzler, over on the far right; she looks like she could kick serious butt. The punkier look suits Namor. And as discussed on the other thread, the costume given to Storm will be highly popular with some demographics. ;)

Edit (a week later): it seems that the Rogue character is actually going to be called "Legacy". I much prefer "Reaper". Well, we'll soon see how it all fits together.
Posted by Russell Blackford at 4:07 pm