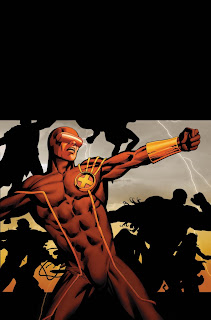 The November solicits for the X-Men books show all the X-teams and big-time players facing up to the aftermath of the current Schism storyline. Although we've been getting plenty of hints, it's still far from clear just how it will all shake out: which characters other than the most obvious will be in the Uncanny X-Men book (and team), which will be in the Wolverine and the X-Men book (and team), and how the various associated groups like the New Mutants, Generation Hope, the returning X-Jammers, and the Magneto/Rogue/Gambit triangle will be affected as old alliances are broken and new ones forged.

Marvel has managed to intrigue me with this storyline - I roolly, roolly want to see who ends up allied with whom, what their respective rationales are, and whether the whole thing can be made to seem plausible, given what we know about the characters and their motivations.

Since most of the world's mutants were moved to the old Asteroid M, now a floating island off the coast of San Francisco, the X-Men franchise has had a huge political struggle just crying out to be written and drawn for us. There was no way that Cyclops could rule over this bunch of 200 strong-willed, philosophically divided superhumans forever ... without a challenge coming from somewhere.

Marvel has gone with a challenge from Wolverine, rather than somebody more obvious from an in-world perspective like Professor X, Storm, Magneto, or Namor, and I still need to see this made convincing, given that Wolverine has never, to date, seemed like a willing or plausible leader of mutantkind. But, hey, I'm open to it, and this is a chance for some major character work if the current writers are up to it. (I have no reason to think they're not: it's a very solid creative team right now, though I'm sad to see Mike Carey leaving it at the end of a brilliant 5 1/2 year run on X-Men Legacy.)

Let's see how it plays out. Here I am, grabbing the popcorn.
Posted by Russell Blackford at 6:17 pm

Comic Book Resources has all the first Regenesis covers lined up: