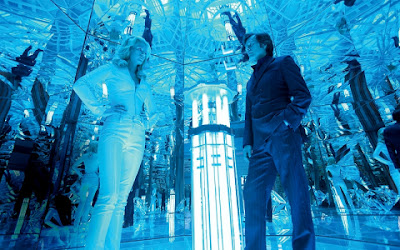 This image of Emma Frost and Sebastian Shaw (acted by January Jones and Kevin Bacon) is from the forthcoming X-Men: First Class, in which the Hellfire Club apparently have a big role to play as bad guys. The image first appeared, as far as I know, over at Empire Online.
Posted by Russell Blackford at 2:40 pm

I think her hair has to be straighter to be Emma Frost. And I'm REALLY not sure about Kevin Bacon as Sebastien Shaw; he seems to need more presence than Kevin Bacon can provide.

But then I like Emma Frost a lot better than Sebastien Shaw, so I'm more concerned about her story.

I'm thinking based on what little I've heard about this that this movie might be one I wait for the DVD to come out before watching it.

Unless they fix Cyclops, of course. I grumbled that I hated him after the first X-Men movie. My co-workers pointed out that I should, as a Wolverine fan, but I replied that Cyclops was one of my favourite characters in the comics, and so them making me dislike him was not a good thing. So maybe he'll be less of a jerk in this one.

I don't think you'll have to worry about Cyclops one way or the other. In the movie continuity, Cyclops isn't even born at the time of this prequel. The movie timeline is radically different from the Marvel floating timeline, in which Cyclops and Emma are about the same age.

That will bother a lot of fans of the comics, but doesn't worry me at all. I just see it as another diegesis with another interpretation of the characters. I only ask that something about their essence is caught.

I agree that Kevin Bacon is an odd choice for Shaw, but maybe he'll offer us an interesting take on the character. It's not like I would have chosen Ian McKellen for Magneto, but look what a wonderful job he did as a Silver Age version of Mags. (Conversely, I think Michael Fassbender is perfect casting; I hope I'm not disappointed.)