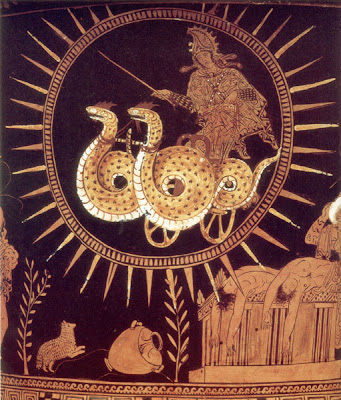 Over on Gillian Polack's blog, Jenny writes about the much-maligned Medea, the sorceress extraordinaire from Greek mythology who married Jason (of Argonauts fame) and ended up obtaining a gruesome revenge when he dumped her for a younger princess who offered better political prospects.


Even in Euripides' sympathetic version, Medea is best known for helping heroic Argonaut Jason to win the Golden Fleece, but her life is larger than that.

I'd never really understood, despite all the servings of myths and legends in my childhood reading, that Medea was the grand-daughter of Helios, the Sun, and far more powerful a being than Jason ever was. She was fabulously exotic: a Bronze Age princess and sorceress, whose turbulent life took her from exotic Colchis, at the far end of the Black Sea, to some of the greatest palaces of Mycenaean Greece: Iolkos in Thessaly, mighty Corinth, then finally Athens.

Medea served the dark, but well-respected, goddess Hekate. She was the niece of Circe, most famous of Greek witches, who ensorcelled Odysseus' crew. Her father was a powerful king and godling. After delivering the Fleece to Jason – who wouldn't have had a hope without her – and getting him safely back to Greece, Medea murdered Jason's treacherous uncle Pelias, healed the hero Herakles of his madness, and brought about the birth of Theseus.

Medea's myth reveals much about the place of women in ancient Greek society. In the earliest of the ancient sources, Medea is relatively innocent – according to archaic–era Hesiod, she's a "goddess" who marries a mortal man, Jason, and bears him fine sons. Nothing else is mentioned. As time goes on, evil acts accrete around her, so that she becomes an exaggeration of everything a Greek man would not wish for his daughter, wife or daughter-in-law.

Posted by Russell Blackford at 10:20 pm

Medea had to escape because she murdered their children... You are painting a very one-sided picture of her.