Causing offence to Catholics and atheists 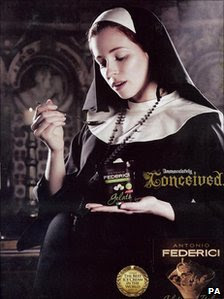 The image above has been banned in the UK by its Advertising Standards Authority, as it supposedly makes fun of the Catholic Church and potentially causes offence to Catholics. But no one has banned the Pope comparing atheism and the Nazis, though that is about as offensive as anyone can get.

Nor should they: generally speaking, mere offence is not a good reason to ban speech and expression. In so far as the above image makes a visual pun in advertising the product (a brand of ice cream), it's amusing and artistic. To the extent that it expresses derision towards Catholicism, that is the kind of speech that should be especially protected - we should be free to express our feelings about powerful institutions such as the Catholic Church and its doctrines, and it's nice to know that even advertisements for ice cream can be good for something.

The Pope should, generally, be able to say what he wants, however obnoxious and meretricious. Thus, I defend his legal right to say such outrageous things as this:

Even in our own lifetime, we can recall how Britain and her leaders stood against a Nazi tyranny that wished to eradicate God from society and denied our common humanity to many, especially the Jews, who were thought unfit to live. I also recall the regime’s attitude to Christian pastors and religious who spoke the truth in love, opposed the Nazis and paid for that opposition with their lives. As we reflect on the sobering lessons of the atheist extremism of the twentieth century, let us never forget how the exclusion of God, religion and virtue from public life leads ultimately to a truncated vision of man and of society and thus to a “reductive vision of the person and his destiny” (Caritas in Veritate, 29).

He should not be able to destroy the lives of individuals by saying, for example, "Stanley Snark is a Nazi" or "Betty Boojum is a pedophile." But he should be free to deride or criticise atheism, even if he says despicable and ludicrous things in the process. It's well known - and should be uncontroversial among reasonable people - that Nazism was not an atheistic philosophy, and, indeed, that its extreme anti-Semitism was grounded more in Christian history and specifically Catholic doctrine than in anything that Hitler might have gleaned from the great secular tradition of Epicurus, David Hume, and John Stuart Mill. The Pope should be legally free to make such bigoted and deceptive speeches, but he should also expect to be repaid with outspoken criticism and outright mockery of his organisation and its cruel moral doctrines.

Meanwhile, the UK's ban on the relatively harmless ice cream advertisment should be lifted. There is a good chance that it would not survive legal challenge, especially if taken all the way to the European Court of Human Rights (which has been strong on defending such images). But it should not come to that. Good sense should prevail, and the Advertising Standards Authority should withdraw its ban.
Posted by Russell Blackford at 12:38 pm

Paula Kirby has suggested on richarddawkins.net that the pope is setting up a straw man to deflect attention away from his complicity in covering up child rape and abuse by his priests. Whether or not this is true you are correct that we should uphold his right to say what he thinks, but robustly criticise him when he is wrong. However, the British media have made sure that the pope has a global platform for his views, while dissenters aren't getting a look in, so it's hardly an equal exchange of views, more a propaganda opportunity.

Hi, Russell. Just for clarification, the ASA is the industry's self-regulatory body. It has no legal authority to stop anyone doing anything (though it can report a repeat offender to the Office of Fair trading, who may in turn decide to take further action).

This decision strikes me as humourless and devoid of any sensible rationale, but it isn't quite as worrying as the state using the criminal law to suppress free speech.

I would say that the legitimacy of curtailing examples of free expression is, to an extent, context depenent. Thus, an advertisement that is to appear on a city centre billboard or the side of a bus should maybe be judged by different criteria than one intended for publication in a specialist magazine, simply on the grounds that any offence involved is that much harder to avoid.

On that basis, had this ad been scheduled to be plastered, five metres high, over the concourse at Euston railway station, a case may exist for curtailment - but only if a similar respect is shown to the sensibilities of those offended by other messages. Once again, religious sensibilities do not deserve particular protection.

As it was intended to be included in glossy magazines aimed at adult consumers, I think a very different standard should be applied, a standard reflective of the likely readership of the magazines in question - something that one would imagine the Grazia editors would know more a out than the ASA.

The Pope's comments about Nazi atheism were just a flat-out, bare-faced lie. The notion that the guys marching across Europe withy 'Gott mit uns' on their belt-buckles were there to spread atheism is almost surreally absurd. But unless and until Scots civil law reflects group defamation, there doesn't seem to be a great deal that can be done about that.

Fair enough, Colin, and thanks for pointing that out. We have a similar industry self-regulation body here in Australia, so I get what you're saying.

But the question then becomes one of how such bodies should act. Though they may not exert political power in the strictest sense, this kind of self-regulation is usually adopted to avoid state regulation that would be even more restrictive. It becomes a difficult balance for those involved - if the self-regulatory body is seen as too soft, it may be replaced with something worse. But if it's too harsh, then we might as well have state regulation and be done with it, because you're really no better off.

My view on this is that such bodies should not be taking it on themselves to "ban" images whose prohibition we'd object to if it were done by the state. If it's wrong for the state to ban it, then the guidelines used for self-regulation should not be so tight as to ban it either, as this is against the whole point of self-regulation. So even if it's not a free speech issue in the strictest sense, it's still one that should attract public debate. If certain kinds of images are kept out of circulation because of self-regulation that is only there in lieu of something worse ... well, we need to know that the self-regulation is not going to be too restrictive. Otherwise, you may as well have the "something worse".

Imagine if these ads had made fun of mohammad and Islamic symbols? The whole island would be in flames...

That's what the chill of free speech on the old continent is really all about.

Betty Boojum is a pedophile???

Fair point, Russell; if the side-effects are identical to the disease symptoms, there's no sense in taking the medicine.

Yeah, as you surmise, the ASA - like the Press Complaints Commission - is pretty well constantly trying to avoid the imposition of external regulation, presumably because they think it would be worse. (Btw, do you ever watch The Gruen Transfer? Some neat insights into the Aussie advertising industry.)

I entirely agree that, whoever imposed this particular ban, it was a poor, poor decision. But the display of 'offensive' material in public places, where seeing it is all-but unavoidable, poses a challenge to Feinberg liberals like us.

Probably the worst example I can recall was a campaign poster in Glasgow. It was at the time when the Scottish Govt were working to repeal a basically symbolic but nonetheless homophobic piece of legislation. Anyway, the poster came very close (without quite spelling it out) to equating gays with child abusers.

So, on the one hand, the poster was adopting a position on an issue of current political importance, which should nudge it towards the class of strongly protected speech. On the other hand, it was defamatory, grievously insulting and could even be thought to provoke homophobic violence.

Now I certainly wouldn't advocate a ban on the expression of such views. But towering over a railway station concourse, right beside the arrivals/departures board? There again, if we allow controversial messages to be preached only to the already converted, that will have a huge chilling effect on political/ethical debate.

Yep, there is a grey area here. I'll be doing my best to make sense of it in my free speech chapter of The Book, but my leaning is always towards freedom. I agree that there has to be some limit to the time place and manner of delivering messages, though. This particular decision was, indeed, a very poor one.

But the sort of example I'm thinking of would be the display not just of nudity but of hardcore pornography, perhaps even involving such things as coprophilia, in very public places such as the kind of billboard you mentioned. Here, there's no incitement to violence but such an extreme in-your-face image is going to produce feelings in many people that are deep in the grey area where offence shades into harm.

As you say, though, we have to be careful or we'll end up with a tyranny of the sensitive who might say - for example - that seeing their pet views criticised or satirised makes them feel nauseated. In a pluralist society, I think we have to demand that people be tougher than that about such things, or at least that they don't try to get the state to help them out (or even industry regulation backed up by the threat of state action if it is insufficiently restrictive).