We were talking the other day about the incipient cancellation of Uncanny X-Men. Now it's announced that it will split into two titles, both starting (back) at #1. 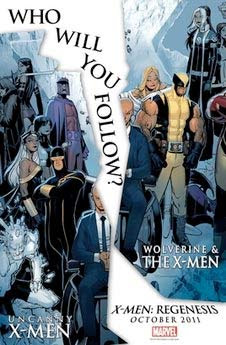 There will be a new series of Uncanny X-Men, which is fine and not unexpected. There will also be a new Wolverine and the X-Men book for the adventures of those X-Men who decide to leave Utopia under Logan's leadership. All fine with me, except that "Wolverine and the X-Men" is such a lame title. It's too much of a mouthful; it sounds (for good reason) kind of childish and cartoony; it's not accurate, as many or most of the X-Men will mainly appear in the other book; and it tends to demean everybody else who'll be in the book (i.e. other than Wolverine). Couldn't the powers that be have come up with something punchier like, I dunno, "Rebel X-Men" ... or whatever else might actually fit the situation?

Still, the political split in the just-starting Schism storyline, leading up to this situation, should be interesting. I've been waiting for the politics of the current huge, all-embracing nation of X-Men led by Scott Summers to play out, and it could be interesting ... even if Wolverine isn't exactly the most obvious person to lead a rebel/breakaway group. That seems more like a marketing ploy than a logical progression, when there are several characters who'd normally put themselves forward as leaders of mutantkind long before Wolverine - and they all seem better qualified. Wolverine has never been portrayed as a would-be leader or as particularly capable of leading more than a field team.

All the same, perhaps the fact that the rebellion, or splintering, or whatever it will be, is going to be led by him (rather than, say, the much-put-upon Professor X himself) can be made to work as a story. I don't want to be a negative Nancy about this - let's see if the X-office can make it all appear plausible and interesting.

Edit: There's stuff about this all over the net today, but go here for some thoughts from the editors involved.
Posted by Russell Blackford at 12:18 pm

I caught up with X-Men: First Class last night and I agree with your assessment entirely. It's a fantastic film, and a rare beast that works as both a superhero action movie and an affecting drama about a schism developing between friends over a matter of principle.

I don't know how I feel about this new story arc in the comics, but damn that's a bad cover illo of Wolverine. He looks like a plastic He-Man action figure from the 80s that has been steeped in a bucket of steroids.

I agree that the choice of Wolverine to lead the dissident X-Men isn't an obvious one (except from a marketing perspective). The character, as you say, hasn't really been written for a leadership role of this kind - certainly he's not the type to break away from the Summers regime on moral grounds, in the same way that Beast was made to, last year. But perhaps Wolverine's unauthorised and increasingly dangerous X-Force will serve as source of conflict between Logan and Summers?

I've really enjoyed the first two instalments of "Prelude to Schism". Both were well-written, sensitive explorations of character. With any luck, the "ReGenesis" story will exhibit the same level of craftsmanship, because the thing that will make this schism compelling and convincing will be the way the characters are made to deal with the choices with which they are presented.

Wolverine and the X-Men is the cartoon title which puts him as the leader over all the (teenaged) mutants, so there is precedent. I wonder how they will get him to be the leader of his own band of x-men, be in the avengers, be all over the world in his own book(s), and make guest appearances as often as they can whore him out. They've turned wolverine into a marketing gimmick, and frankly they can keep him.