Marvel notoriously did it with Spider-Man and Mary Jane Watson. Will DC go through with ending Superman's marriage to Lois Lane as part of its impending reboot of its whole line? 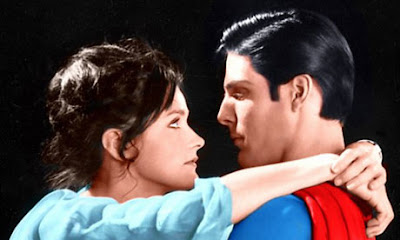 One might question whether the marriage made sense in the first place. That could be discussed at a number of levels. But expect a lot of fans who liked it or even grew up with it to be expressing their dismay. Marvel is still copping flak years later over the Spider-Man/MJ thing. 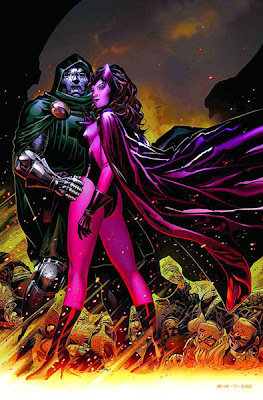 Meanwhile, to make sure this post has something to do with supervillainy, it would sure be something (though I can't see it happening) if Marvel went through with getting Doctor Doom married to the Scarlet Witch.

(Yes, I'm kidding with my last comment... but only kinda half kidding.)
Posted by Russell Blackford at 11:15 pm

My reaction to this is "sure why not, if they're doing a reboot?"

Though in general, the "main" superhero comics baffle me. I was born in '87, and for me superheroes are first and foremost characters from Saturday morning cartoons.

This whole business of decades-long continuities where the characters never age and everyone comes back from the dead eventually just baffles me.

Heh, I'm from '87 as well. Animaniacs, Freakazoid, Gargoyles, The Tick, Ninja Turtles... I actually remember catching Bozo the Clown, Scooby Doo (by then it was the version with Vincent Price) and the original Adam West live-action Batman series before school as a very early elementary student! Haha, haven't thought about that in a while.

I do agree about mainstream hero comics, though. I've always been more of a DC guy (ever since I was exposed to reruns of Batman: The Animated Series) but I'm not very deep into the canon at all.

I think I've commented on another of Mr Blackford's comic articles that while I appreciate what the Big Two do, I am much more interested in independent or imprint comics. When good writers and artists are freed from the shackles of editorial and from the weight of decades of nonsensical canon, their stories are generally far more interesting. See for example The Umbrella Academy, or just contrast the big Vertigo title Fables against anything the in DC continuum (it's better than 95% of it).

re: comic-relationships, I don't see why they can't change things up. There are several high-profile relationships in the DC mainstream that could be ended or re-imagined, but tbh few comics relationships are portrayed earnestly enough to make me care what they do with them. You can only see so many variations of Strapping Spandexguy Saves Comely Corsetlady before it becomes terribly trite. That last alliteration was a happy accident, I'll admit. I will say that there have been the odd few comics wherein a genuinely strong woman character had a role other than "fungible damsel" but those are rarely very entertaining because they're usually overwritten to seem edgy which makes their treatment of the situation seem flippant.

Marvel's I do I understand. You basically just have to accept that they're telling stories about their characters and not trying to be totally consistent with the flow of time. However, the general rule is that the original space journey by the Fantastic Four took place 13 years ago, so all events since have taken place in an increasingly cramped 13-year period. New events happen "now" so the date of the space flight is constantly silently retconned - it's currently 1998. Everything else that has to be is implicitly discarded or retconned, and things can look rather different when old stories have to be retold.

There are other things, such as that in-world events were covered more quickly in the Silver Age, so Franklin Richards, who first appeared as a baby in about 1968 or 1969 (I'd need to check) is 8, not, say, 11 or 12. Compare Luna Maximoff, who first appeared in the eary 80s and is now 6, or not much more. Stories that were published about 20 years ago happened about 5 years ago within the diegesis; but there's no general rule that, for example, 1 year in-universe takes 4 years of our time to cover.

The characters are evidently very, very busy, but of course each issue tends to covers only a day or so in their lives. So if you kinda squint at it all, as Tom Brevoort said on his Formspring page, it kinda fits together.

On the Spider-Man thing, I really don't have a dog in the fight. I certainly don't care that the marriage retrospective break-up involved a pact with the devil (or, rather, the demonic character Mephisto), which has caused a lot of the complaints. And getting rid of the marriage may well have helped the writers.

My only gripe is that massive retconning like this tends to break an implicit contract with the reader that things that are well-established and referenced over a long period are part of the story. E.g. if we were suddenly told that the last, say, 5 years of Uncanny X-Men were all a dream in the mind of Professor X, we'd have the right to be pissed off after getting emotionally invested in those stories.

But most of the Spider-Man continuity is retained on the basis that Spidey and MJ were not married through all that time but were live-in boyfriend/girlfriend; otherwise, all those events "really" happened to them. So the breach of the implicit contract at least isn't as bad as it might have been.

Jambe, I was thinking about the edgy couples thing when I wrote the post. Marvel has been shelving a lot of its more stereotypical romantic couples, at least for now, like Giant-Man and Wasp, Cyclops and Jean Grey, Rogue and Gambit.

I can't see Doom and Wanda outliving its importance to the current plot where they are engaged. But the relationships between, say, Cyclops and Emma Frost, Rogue and Magneto, Giant-Man and Tigra, are all a bit edgy, potentially unstable, and not immediately intuitive, but I think they've all been made to work quite well. It's better from a serial storytelling viewpoint (and for readers, long-term) than trying to show a more stereotyped romantic couple living happily ever after.

Russell, thanks for shedding some light on the time-frame of the Marvel universe. I was aware of the "sliding timeline" but I wasn't aware that there was a general rule governing the ratio of in-universe to publication time. It's obvious that in-universe time isn't equivalent to real time, but I still got a bit of a shock when I read in this year's Giant Size X-Men that the events of "House of M" are only supposed to have occurred one year earlier.

(Which, I must say, kind of reduces the impact of the whole no-new-mutants/waiting for Hope story - I mean, they didn't have to wait very long, really, only about ten months. Just saying...)

Just to be clear there's not a general rule like a 4:1 ratio.

But yeah HoM wasn't all that long ago, I believe Inferno was 5 years or so ago, Luna's birth 6 to 7 years ago, Franklin's 8-9 years ago, and the FF's original space trip 13 years ago. Various events can be dated approximately off other events that are known to have happened a certain approximate time back, but that is all. Time doesn't flow smoothly relative to publication in our world.

One might question whether the marriage made sense in the first place.
Yes it did. To me anyway :).
I don't understand DC's continual reboots
I don't either. But so long as the stories are good, who cares?