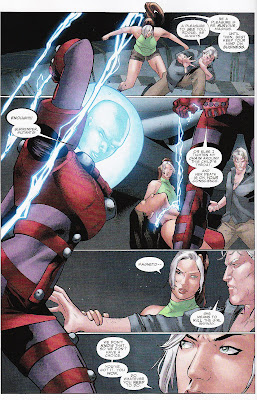 For y'all who need some popular culture in your diets, X-Men Legacy # 241 finishes off the four-part "Collision" arc, in which Magneto, Rogue, and some of the kids in the expanded X-Men save Mumbai from an ongoing catastrophe caused by a whole (small) city of superpowered bad guys called "the Children of the Vault".

X-Men Legacy, which has been written for some time now by Mike Carey, is currently focused on the adventures of Rogue. For the past few months, it's actually been more the Magneto-and-Rogue show, as Rogue has been plunged into a series of adventures fighting alongside the X-Men's premier supervillain.

I always, at this point, have to remind folks whose knowledge of the X-Men mythos is based solely on the movies that these are not exactly the Magneto and Rogue that you know. Not only is Rogue all grown up now; comic-book Rogue actually started out as a villain, and arguably a nastier one than Magneto himself. But she switched over to the side of good as a result of, well, a mix of things - partly when she temporarily absorbed the personality of one particular hero and gained a sense of what it is like to be a more noble person, and partly when she needed help from Charles "Professor X" Xavier.

As for Magneto, he's physically much younger in the contemporary comics than the version of the character played by Sir Ian McKellen, having gone through a complicated rejuvenation process that left him de-aged by decades. The process also left him much saner, though still morally grey to say the least. Occasionally he goes over the edge into insanity, but his usual modus operandi is that he's a basically good man who has deliberately hardened himself to a mentality of doing whatever it takes to achieve his goal of protecting mutants - which includes killing as and when he thinks it necessary.

In the pic I've provided, he is seemingly about to blow away one of the Children of the Vault, their leader, Cadena, but Rogue gets him to stay his hand. That's a nice touch from Carey and Mann, because Rogue and Magneto once almost became lovers when he helped her out and she stayed for a time at one of his bases, but he then alienated her by murdering one of their enemies, Zaladane, over her protests and before her eyes. Marvel has been teasing us with this relationship ever since, in one way or another.

I've enjoyed the whole "Collision" arc very much. I love Clay Mann's art - especially his depictions of the main characters and their body language, and the CotV's cyberpunkish city - as much as Carey's writing.

Issue #241 is a lot of fun, as Rogue and Magneto kick butt, despite being outnumbered by two thousand, or something, to two (reduced to two thousand, or whatever, to six when help arrives). Eventually, they have to figure out a way to come out of the situation on top without ultimately being able to defeat an entire army of supervillains and their robot support troops in open combat.

Although Wolverine is the most popular X-character - the one that the most readers and cinema-goers seem to identify with - the struggle of ideas between Professor X ("Humans and mutants can live in peace") and Magneto ("The humans hate us, Charles. Fight them with me, or they'll exterminate us") has always been at the thematic heart of the franchise, and the depiction of Magneto as a worthy, frequently successful, not-entirely-villainous antagonist for the X-Men has been crucial to making the whole mythos work, to giving it so much resonance. For the moment, at least, he has sort of reformed and actually joined the X-Men, though in large part this is a matter of the X-Men moving towards his harsh outlook under the pressure of events, rather than him entirely abandoning his view of things.

Carey gets Magneto right, conveying the character's complexity - that he's overbearing and ruthless, with a brooding and menacing presence, but also that he's intelligent and courageous; has a ready, albeit grim, sense of humour (and even finds a moment to flirt with Rogue in the midst of fighting for his life); and possesses a compassionate streak. Rogue is a great character in her own right - brave, smart, rebellious, flirty, and an attractive mix of gentle and hot-headed - and again Carey makes her convincing and appealing. The exchanges of dialogue and other interactions are totally authoritative bits of character work.

Issue # 241 of Legacy is, alas, not perfect. Superhero comics almost inevitably have a rushed quality with various plot-holes that you need to try to overlook, and this issue seemed to me as if it could have been expanded into two issues. That might have allowed us more clarity about some events, not to mention a bit more pay-off when the X-team actually get into battle with the CotV.

There's also just a touch of the common problem with using a very powerful character like Magneto or Thor or the Silver Surfer or Phoenix as part of a team. In this case, the heroes are so badly outnumbered that in theory the CotV are a deadly threat even to Magneto, but he needs help  from his pals to deal with several problems that, on past showings, shouldn't have been all that hard for him. From one point of view, that's necessary, as all the characters must be given chances to shine, but too much of it can diminish the sense of enormous power that you want the big-gun characters to radiate.

Rogue doesn't have the same air of raw power as Magneto, but her power is the power to absorb others' powers - and she can keep adding these as she touches more and more of her opponents. Surely she could have made better use of this when so outnumbered. I can't help thinking that a bit more room, maybe a fifth episode or an expanded part 4, would have helped - the CotV might have been allowed to throw more of their ammunition at the X-Men on-panel and make us see more situations where all of the good guys are forced to dig very deep.

But hang it, why be picky? I'm hooked on this creative team, and I'll definitely be reading more material from Carey. His work on X-Men since he took over the Legacy book reminds me of Chris Claremont's great original run, and he has me eager to know what happens next with the sub-set of X-characters that he's currently opted to focus on.
Posted by Russell Blackford at 3:54 pm