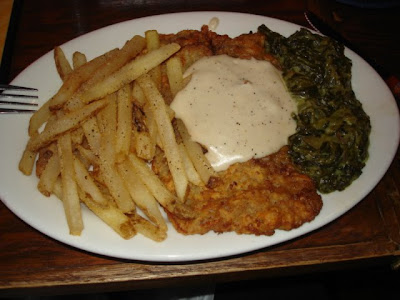 Thanks to Elze Hamilton for arranging the great meet-up of Austin-based secularists, sceptics, atheists, etc., at Threadgills last (i.e. Thursday) night. It was great to get such a good turnout in honour of me and Jenny, at quite short notice.

We just met informally over dinner, but we had about 20 people in all - most of whom did not know each other, as they came from a diversity of local groups. The discussion was animated but constructive and friendly, flyers for 50 Voices of Disbelief were distributed, some new connections were made, and I finally tried the world-famous chicken fried steak.

I'll be posting some photos when I get a chance.

Thanks, too, to everyone who attended.
Posted by Russell Blackford at 1:30 am

Any visits planned for the Dallas/Ft Worth area on this trip?

Alas, no. Our next stop after visiting friends in San Antonio is some time in Kansas City, where Jenny's publisher is based.

Very nice, but DID YOU HAVE A CHICKEN FRIED STEAK? Threadgills is famous for them!

Whoops, missed the aside about the c.f.s. Sorry!

If hadn't had the chicken fried steak, I'd never had heard the end of it from Jerry.

i dont like cfs on principal that it has nothing to do with chicken. now steak fried in chicken fat or chicken fried in tallow - now theres good eating.