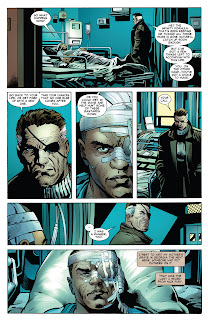 Fans of the recent Marvel universe movies up to and including The Avengers will be familiar with the character Nick Fury - played by Samuel L. Jackson. The trouble is, Nick Fury in the main Marvel universe is a white guy who doesn't look much like Samuel L. Jackson at all (though he does have an eyepatch, like the movie character, and his personality is similar enough to that of movie-Fury).

By now, though - and certainly once The Avengers is finally released in the US - the general public will immediately think of Samuel L. Jackson when it hears the name "Nick Fury" ... which creates a small problem for selling comics (hey, who's this frakking white guy?).

In fact, Marvel used the likeness of Jackson for the alternative Ultimate Universe version of the character some years ago, before any of these movies were made. But that doesn't help make the main "616" universe accessible to new readers who might wander into a comics shop after watching some of the movies.

Enter a new character, Marcus Johnson, who turns out to be the orginal Nick Fury's illegitimate son. Johnson was, in fact, named by his (obviously black) mother "Nicholas Fury, Jr.", and the "Marcus Johnson" name was to protect his true identity. He's now reverted to his real name, shaved his head, grown a beard, and ended up looking like ... well, Samuel L. Jackson. So, Marvel now has a new Nick Fury character, with Nick Fury, Sr., being shunted gracefully into semi-retirement (like many of Marvel's characters, he's incredibly old anyway, though until now he's been kept fit and relatively young by a special life-extending chemical formula). 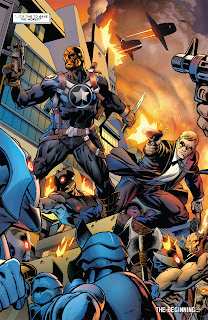 We're told that Nick Fury, Sr., will still have a role now and then, so his dwindling number of middle-aged fans don't lose out entirely (it's nice that they didn't kill simply him off). But commercial reality evidently rules here. I'm good with it, but there it is.
Posted by Russell Blackford at 10:46 am

This is the first I've heard about this. By any chance, have you ever read Warren Ellis's silly NEXTWAVE: Agents of H.A.T.E? The Nick Fury character's named "Dirk Anger." Hehehe.

It's an interesting move, eh? I guess we'll see a lot of things like this happen as Marvel adjusts itself to the movie universes and tries to cash in/avoid confusion. We've already seen Hawkeye have a change of costume to match movie-Hawkeye, and I'm betting that we'll be seeing a lot more of certain characters (including the new villain foreshadowed in the credits sequence of The Avengers ... whose identity I won't spoil).

And Marvel has certainly been eager to cash in on the recognition its movies have afforded certain characters: War Machine even got his own (albeit short-lived) series. It will be interesting to see, if Marvel does indeed decide to highlight the probable villain of The Avengers 2, how he gets inserted into the Avengers comics line, given that lately he has tended to feature more in...well, in a different franchise.