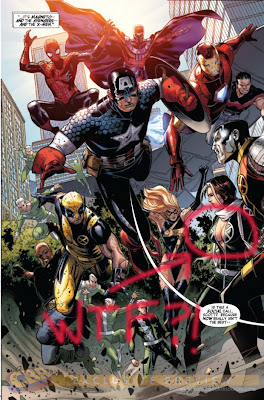 This post is another one to come back to - i.e. I may say a bit more either by editing this post or by writing a follow-up post. Anyway ... a very interesting article by Thompson, who is not naive or extreme, and makes strong points. The long thread that follows has some well-argued opinions, both pro and con.

Just fairly quickly ... regular readers of this blog will know that I am not opposed to nudity, eroticism, or idealised depictions of beauty (provided the concept of beauty concerned is not an unhealthy one - i.e. literally unhealthy as with glorifying anorexia). I am very far from being a prude or a killjoy. But that's not the point. I still think there is something wrong with some of these portrayals of women. At the same time, I like seeing critics such as Thompson examining some of the complicating factors - such as the legitimacy of having some characters, both female and male (Emma Frost, Namor, etc.) for whom it is perfectly in character for them to appear exhibitionist, seductive, or narcissistic.

But what happens if almost all the female characters appear to be like this? E.g., Tigra is basically a humanoid cat - it makes narrative sense that she would go naked, and she is actually given a skimpy bikini just to avoid censorship. But when there is some excuse for almost every female character ... well, any one case may be explicable and excusable, but there's a cumulative effect simply from creating so many characters like this.

Don't get me wrong - I actually like Tigra as a character, and I think she should go virtually nude now that she has been created as she has been. If she went into battle completely nude, at least there would be an in-story reason in her case. Once again, I don't necessarily object to specific examples of costumes considered in isolation.

I can understand that Rogue, who is a young woman from the American South where the weather gets hot and steamy, often wanders around during her off-duty time in very light, but not especially sexualised, clothing. That's in character for her, and, sure, lots of young women in Australia do likewise. But why does she go into potential battle situations with her otherwise-not-revealing superhero costume zipped down to below her breasts - seemingly just to display them to the reader - as in the pic?

Compare the costumes worn into the same situations by other prominent Marvel characters who happen to be male, such as Spider-Man, Magneto, and Iron Man, all in the same pic (from Avengers: The Children's Crusade, where a lot of the main Marvel heroes and villains end up in conflict with each other). And what about Ms Marvel's costume (in this same pic, just to the left of Rogue)? Once more, don't get me wrong, it's an iconic and nicely designed costume, and I don't disapprove of it in itself and in isolation, but what if most of the female characters, both heroes and villains, dress in these skin-baring costumes? As they do.

You'd never see Magneto or Iron Man or Dr. Doom dressed like that for battle. (OTOH, you often do see Namor going into a fight wearing just a speedo ... which is in character for him.)

But the brokeback poses are typically not the character wishing to look seductive, or being unselfconscious about her body. These are highly sexualised poses created to exhibit the character in a certain way for no in-story reason at all, and indeed at points in the narrative where it makes no sense for the character to be trying to attract sexual attention. There's a tendency for this to go beyond idealised depiction of beauty into something more demeaning (and therefore not necessarily pro-sex or pro-body).

The critique has to take into account some of the specific pros and cons, and the best critics writing on the issue are alert to them. I like the piece by Thompson, but I also enjoyed the debate.

As I said, maybe some more later ... although this is longer than I intended. In any event, feel free to discuss now if you like. Do have a look at Thompson's thread to see the points that are being made there, both siding with her and defending some the choices that she criticises.
Posted by Russell Blackford at 8:16 pm

I'm not at all suggesting that Marvel is the worst offender. The opposite may well be true. Thompson goes much wider for her examples.

Some commenters made a solid point about 1. Body Types.

Male comicbook-heroes have bodybuilder-physiques more often than athlete-physiques. It's a pornographic bodytype, not an athletic one.
On the other hand, exceptions are even rarer for female heroes.

I'd also recommend reading "And he's hot, too..." from the Girl-Wonder.org archives before continuing on the whole "But men are portrayed as teh sexay, too" argument.

I don't actally think I know any women who go for the full-on bodybuilder type, as opposed to relatively lean athletic types, or to bodies that just look strong in a normal way. The bodybuilder images, I think, tend to be more a male fantasy. Using those massively muscled male bodies in comics is not to appeal to women. That doesn't make it a terrible thing, but it's not as if women's fantasies are being appealed to on equal terms with men's fantasies.

It's interesting, though, that a lot of women do, in fact, read comics ... and evidently find other things appealing.

I also had an interesting discussion about this post over on Facebook, and out of it I just want to emphasise that I am not opposed to nudity, or eroticism, or even, when taken one by one, to female characters who are narcissistic or seductive or nudists! The problem with the female characters is partly the cumulative effect of so many of them fitting into versions of those categories - many things that I could and would defend in isolation, one at time, can add up to a problem if such choices are being made, like, all the time.

And then, there's a difference between unselfconscious nudity (I'd even be happy with more of this, involving characters of both sexes, as the messsage is a body-positive one), seductive nudity (absolutely fine if in character and relevant to the story, in which case the message can be body/sex positive), and pornified nudity that tends to demean as much as celebrate the characters in exhibiting them directly to the reader (and thus sends a mixed message at best). There can be legitimate arguments about where lines are drawn in particular cases, but sometimes it's clear enough, and again we get cumulative effects from many decisions.

Who said anything about it being pornography for women? :P

(Point was, it's for looks, not health or strength.)