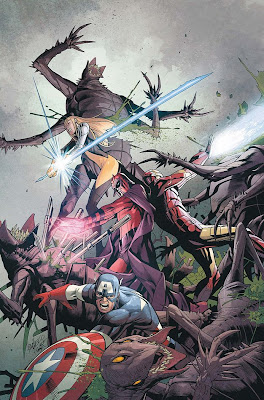 Marvel Comics' big "event" for 2012 is an Avengers vs X-Men dust-up that begins very soon. In that context, here's a good interview with Kieron Gillen, who now writes the flagship Uncanny X-Men title. Gillen reveals that he has been shaping events in this title to lead up to the "vs" event and make it matter. He has a fair bit to say about how the current and forthcoming issues of Uncanny X-Men are meant to lead in. Sample:


Since I knew AvX lay ahead, I knew that with the double-shipping I'd get 10 issues before the crossover hit. The crossover, as I said earlier, is such an enormous thing that it's going to fundamentally change the sort of stories it's possible to tell. So I knew that I had this space to basically let the Extinction Team exist. And I basically wanted to tell a year's worth of stories in it. So rather than the 4-issue arcs I was writing before the relaunch, I aimed at three-issue arcs. The second arc expanded to four issues — I'd written it for three, but due to the density of subplots, it sat better in four. And the final arc, I compressed down to two with every technique I could think of, which makes it incredibly punchy. Issue #9 may be my favorite “traditional” X-men issue of the run, actually. #4 is my favorite generally, but that was so leftfield, I'm not sure I can count it. The #9-#10 arc is about a jailbreak from the Peak, and in #9 alone five different alien invasions are defeated. Hypercomics are go!


So, amongst it all we can expect to see the X-Men and Avengers siding with each other in beating back a series of alien invasions, before they end up at each others' throats over how to respond to a new manifestation of the much-feared Phoenix Force. Some things to look forward to!
Posted by Russell Blackford at 5:32 pm