Odin and Galactus butt heads in The Mighty Thor # 5. The battle continues, in a new phase, in the next issue. Going on what is shown here, you'd think that Odin's headbutt is effective, but he actually gets the worst of it when the smoke clears and Galactus recovers quickly. 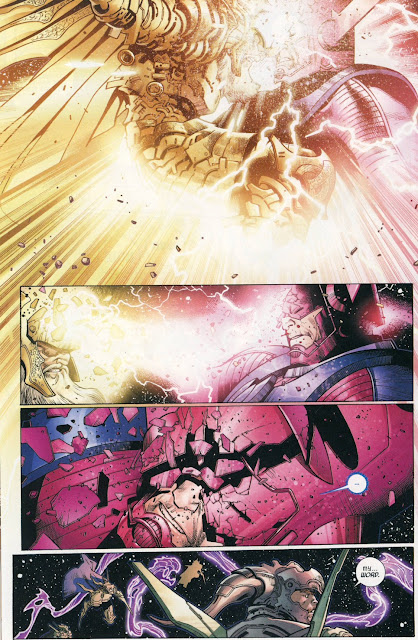 That's just as well, since Galactus is supposed to be a universal force somehow mediating between Death and Eternity, while Odin is, um, just the head of a local pantheon of gods - there are plenty of others in the Marvel Universe, with Zeus as the most obvious.
Posted by Russell Blackford at 8:27 pm

Oden is killed by Fenrir during Ragnarök. Fenrir being the father of Sköll and Hate who eat the sun and moon.
Fenrir is later killed by Oden's son Vidar, who tears Fenrir's jaws apart protected by leather scraps sacrificed or discarded by humanity.