Sunday supervillainy - the ongoing drama of the Scarlet Witch in Avengers: The Children's Crusade 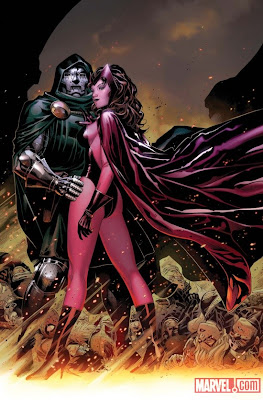 USA Today has an article on events in the current mini-series Avengers: The Children's Crusade, which brings Wanda Maximoff, a.k.a. the crazily powerful (and somewhat crazy) Scarlet Witch, back to the Marvel Universe.

The mini-series has been released slowly, with a bimonthly schedule that has already slipped a couple of times, but it has now reached issue # 7 of 9. At this stage, most of Marvel's highest-profile characters - and numerous others - are squabbling over the Scarlet Witch's fate. This follows her horribly destructive course in several stories last decade, which culminated in the notorious line, "No more mutants," with which she depowered most of mutantkind at the end of the House of M event.

USA Today quotes scriptwriter Allan Heinberg, who emphasizes the thinness of the line between heroism and villainy, once characters are given great powers and begin acting for greatly higher stakes than ordinary human beings:


Heinberg says he was trained early on that even so-called "bad guys" are the heroes of their own stories, which seemed particularly resonant to him in the case of the Scarlet Witch and her children. So there are no villains in Children's Crusade, where even the usually megalomaniacal Doctor Doom is a sympathetic character.

"Crusade is really the story of a group of super-powered kids struggling to be heroes in a world where superheroes can suddenly turn into supervillains and vice versa," Heinberg says. "And real life is rarely, if ever, black and white about who the heroes and villains are of any given story."

Marvel has been hyping up the series over the past week or two, with a batch of short Heinberg interviews to bring us up to date, remind us of the roles of major characters in the story (such as Magneto, Iron Lad (who is destined to grow up to be the Kang the Conqueror), Doctor Doom), and the Scarlet Witch herself, and to whet appetites for the last couple of issues.

I'm loving this mini-series, though it's attracted controversy over some of Heinberg's decisions. He makes some of the heroes (especially Wolverine and Cyclops) appear especially bloodthirsty and almost petulant in their hunger for revenge. Perhaps Cyclops is a bit "off" in his preparedness to kill Wanda Maximoff on the spot, and it's a bit difficult to believe that so many of the other X-Men would back him up on this. Conversely, Doctor Doom and Magneto manage to appear dignified and comparatively reasonable, even as they come into conflict with each other and many of the other superpowered characters who get caught up in the rush of events.

Then again, that's not entirely unrealistic: so far, the villains are more concerned about the Scarlet Witch's welfare (Doom has fallen in love with her and Magneto is her father) than in their rival ambitions for world domination. Perhaps there's no reason why they shouldn't come across as more reasonable than the volatile heroes in a family situation like this. At the same time, the stakes are enormously high, the outcome uncertain, and the need to do something (but the characters can't agree on what) especially urgent.

Generally speaking, Heinberg is astute in his depictions of the voices, motivations, and power sets of his huge cast. He is writing a rare story that involves many of Marvel's iconic characters, all with conflicting ambitions and desires - there are many more than two sides to the evolving story. Generally speaking, he portrays them all with respect for their abilities, back stories, complicated relationships with each other, and likely motivations.

I especially like the way he has blurred the dubious line that he mentions between heroes and the villains. More than most writers of superhero comics, Heinberg seems aware of the way heroes, almost as much as villains, can be tempted to take matters into their own hands rather than abiding by the laws of ordinary human beings.

This can lead them into outright vigilante conduct, but also to an all-too-easy forgiveness of their main opponents whenever cooperation and camaraderie seem expedient (it's conspicuous that nobody is making the slightest attempt through The Children's Crusade to arrest Doom or Magneto for their numerous crimes). There are so many tangled family and other relationships among Marvel's main heroes and villains that we often see something more akin to the historical machinations of the interwoven dynasties of Europe than a struggle between good and evil.

It's all-too-believable that individuals this powerful would start to take decisions on behalf of the rest of us, seeing themselves more like sovereign entitities who are exempt from local laws than like ordinary people among others. That is especially the attitude of a would-be world-conquering villain like Doom (who actually does rule his own fictional country, Latveria) or Magneto (who has repeatedly defended his actions as, in effect, those of a one-man nation at war with humanity). But even the heroes who supposedly defend us from them are not necessarily immune to this way of thinking.

The final two issues of The Children's Crusade have been hyped as making a huge impact on the Marvel Universe going forward. We are already getting characters repowered, saved from what appeared to be their deaths, or uniting (or re-uniting) with family members, and we are warned that some heroes are going to die before it's all over. The outcome is supposed to set up Marvel's biggest events for 2012, so I'll be following to the end ... when it finally comes around in January.
Posted by Russell Blackford at 9:27 pm