See this story and accompanying video.

The background is that US photographer Spencer Tunick set up and recorded an installation of 1000 nude Israelis in the Dead Sea ... with a view to promoting the location and helping in the campaign to save it. 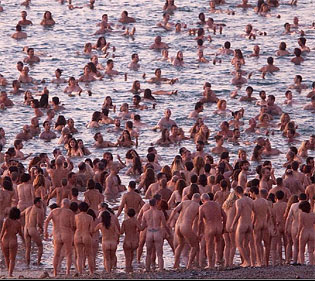 Predictably, a bunch of local God-botherers, in this case Orthodox Jewish rabbis and politicians, attempted to prevent the event from taking place, citing offensiveness to residents and making portentous references to Sodom and Gomorrah.

This is one of the big, big problems with Abrahamic religion: its deep, nasty, and persistent negativity about the human body and human sexuality - not that there even seems to be anything sexual involved here, just unclothed human bodies.

Which is not to say that all religious people share that negativity as individuals. That is most certainly not the case, as I know well. However, shame about the body runs deep in the Abrahamic traditions, and it's not surprising to see another example of it - or to see an attempt to use state power to impose that particular pathology on others.

Tunick himself is Jewish, though I don't know whether he actually has any supernatural beliefs (Q: "What do you call an atheistic Jew?"; A: "A Jew!"). In any event, he comments lucidly on the issue of nudity in art:

For Tunick, a Jewish American who has arranged naked human bodies over prominent landscapes and landmarks ranging from a Swiss glacier to the Sydney Opera House, a nude installation is an indicator of a host country's openness.

Posted by Russell Blackford at 8:04 pm

I participated in Tunick's spread over the Opera House steps last year. I must say it was probably the most friendly and respectful crowd of 5000 people I've been in anywhere.

Hey, cool! Good on yer, Mike. Now I'm a bit chubbier than I was 20 years ago (say) vanity would probably stop me doing something like that.

I think it would be good for everyone's vanity to do this every couple of years - all those bellies, wrinkles, stretchmarks and varicose veins. Dare I say a warts and all display?

It was a refreshing change from all the air-brushed billboards and pancaked/botoxed faces on primetime telly.

Some behind the scenes shots here