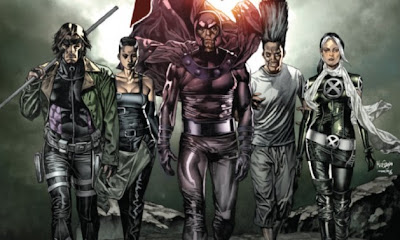 I've previously blogged about the X-Men mini-event Age of X, which concluded last month with the return of the X-Men to their "normal" reality and their current base on an island in the Pacific Ocean just west of San Francisco. Now for the aftermath...

We're shown it in X-Men Legacy #248, in which the characters try to make sense of what happened to them in the warped Age-of-X reality created by Professor X's crazy son, Legion. There, they lived for seven days, loving, fighting, and surviving, but they were all strangely changed (some more than others) and were given false memories extending back for their whole lifetimes. One character (the time-manipulator Tempo) genuinely died in the warped reality - since her death took place during the seven days that they actually spent there. All the others, heroes and villains alike, are in some way scarred by the experience.

As the mini-event's scriptwriter, Mike Carey, promised us at the beginning, it has brought ongoing consequences for the X-Men and their world. Now we'll see how it pans out in the pages of X-Men Legacy, the ongoing series in which Rogue usually provides the main viewpoint.

The resident telepaths on the island offer to help those characters who want to clear their minds of the false memories (and, indeed, of the true ones from those seven days when they were lost in Age-of-X-land). Most of the heroes take up the offer for one reason or another, but a small number of characters don't. Among the latter are Joanna Cargill - the mutant-supremacist supervillainess known as Frenzy - who still values the passionate, lusty relationship she found herself in with Cyclops, and is now angry (her usual frame of mind for one reason or another) that it's being ripped away from her.

Cyclops himself doesn't even contemplate a memory wipe, presumably (though this is not stated) because, as leader on the island, he needs to keep a handle on what went on.

Some characters have returned to the island in changed form, whether for better (Hellion) or worse (Chamber). Others need to grapple with how they felt about each other in the distorted world and what their feelings there meant - or now mean - about how they really feel.

Carey drops several bombshells in just this one issue. There are some explanations for events that still didn't make sense at the end of Age of X, and above all we see some adroitly handled interactions among the characters, especially the few who choose to keep their Age-of-X memories. As I've noted with Carey on previous occasions, he plainly loves the characters that he focuses on, and his work with them is something quite exceptional. In this case, I found important characters saying and doing things that I wouldn't necessarily have expected ... but which got me muttering, again and again, "That's right." I.e., it seemed, once shown, to be how that character actually would react to the stress of the circumstances. When that keeps happening, it generates a pleasing sense of solidity, a feeling that the characters are in safe hands.

Overall, I thought this was a wonderful issue on its own merits, and a fitting aftermath to what has been an intriguing story. It opens up tantalising possibilities and I see it's getting good to great reviews elsewhere on the internet. It fully deserves them.

My only gripe is about some of the artwork - notably why the physically imposing Frenzy, a huge, towering woman with superhuman strength, is made to appear rather petite, so that she has to look up to Cyclops rather than standing over him. This rather undermines some of the point of their interaction. Cyclops is supposed to be a very tall man, but not on the same scale as her. Perhaps it would have looked best to have them staring directly across at each other, but even that would have been a bit of a cop-out. In any event, some of the dramatic potential of the relevant scene is compromised.

Even on the cover, which I actually like and show above, Frenzy is rather dwarfed by Gambit and Magneto, whom she is framed between: they are supposed to be large men - and Magneto in particular is always shown as physically imposing in his own right - but she should be notably bigger than either.

There are other issues with the art, such as Magneto, the X-Men's sorta-semi-reformed arch-villain-in-residence, changing from rather ugly and off-putting to regally handsome (as he's usually portrayed) and back again ... even from panel to panel. This is in the middle of a highly emotional, and subtly written, debate that he has with Rogue. What's that all about? (And no, I assure you it's not done in a way that could be some sort of allegory ...)

This sort of thing doesn't exactly spoil the book, but it's an unneeded distraction.

Such gripes about the art aside, I'd be giving this a 5/5. What the heck, it's a tour de force of character work, set within an emotionally tricky situation that would be difficult to think through and write so adroitly, especially with only the limited dialogue of comic-book panels to work with. This is downright impressive work. We have long-awaited revelations about the little group of X-Men who've been missing in space, and we see Rogue trying at last to get a better grip on her feelings about the various men in her life.

Great stuff overall, and it can have that 5/5 anyway.
Posted by Russell Blackford at 6:20 pm

Thanks for your review, Russell. I've been enjoyed X-Men Legacy too. I had just decided to wait for the TPs, but will now just have to pick up 248. Focusing on the characters is definitely crucial to making and keeping the team interesting.