Although I've yet to read the final instalment (link comes with SPOILER WARNING), I've been enjoying the Age of X mini-event by Mike Carey that's been going on in the pages of X-Men Legacy and New Mutants over the last few months - and I've loved the redesigns of the characters by Clay Mann, who has reimagined them all for a desolate world in which the remaining mutants live in a fortress under continual siege from human military forces.

The event has been, in part, a detective story, as the main players have sensed something "wrong" with the reality they've found themselves in - aspects of it haven't added up, and we've seen several characters trying to figure out why. The mystery is now solved, and I gather that the "normal" reality of X-Men is restored by the end of the story ... along with the characters' original memories. As revealed in the previous episode, it all involved Professor Xavier's crazy, ridiculously overpowered son, Legion. 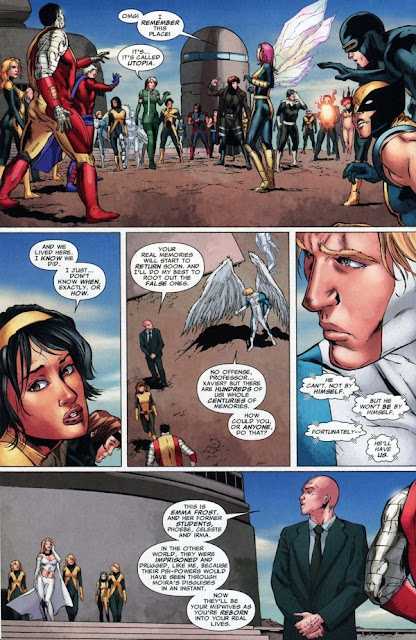 Since the characters actually lived in the altered reality for a full week - this wasn't a dream or immersion in cyberspace - with different relationships and responsibilities, there's now plenty of opportunity for Age of X to have lingering effects. Apart from that one week, each character also has memories of years of events that never happened.

E.g., Storm and Namor, who've been shown to have a certain admiration of each other in the past, were made lovers in the Age of X world. How are they going to be affected by their memories (both true and false) of that? Come to think of it, Cyclops was paired off during that time with the brash supervillainous Frenzy, the outcome of which should be amusing if they're going to retain the memories of what happened (as it seems they will).

Emma Frost is Cyclops' lover in the normal continuity, but she's also had a past love affair with Namor, the undersea superman who rules Atlantis, and the two of them have an ongoing erotically-charged friendship. Throw in the newly-established Storm/Namor connection, and Emma is going to be sooo pissed off by all of this.

All of which just proves, folks, that the soap-opera element of X-Men is the most fun part - more than the superhero/supervillain battles and even more than the continual political and philosophical conflicts. Onward, now, to see what the fall-out might be, though first I need to read Carey's final chapter to get a better idea of what actually happened here.
Posted by Russell Blackford at 1:31 pm

I have to laugh at Pixie apparently saying, "OMG!" Hopefully she actually said, "Omigod!"

On a small tangent..
I don't know if you follow any DC books, but in a current Batman storyline, there are some Christianity-themed villains running the heroes through a gauntlet. In Red Robin #22, the titular character (Tim Drake) passes his test and is nearly deemed worthy, until he admits that he doesn't actually believe in god.