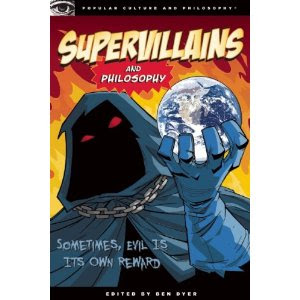 At the suggestion of one of this site's frequent commenters, I read Supervillains and Philosophy, a collection of essays edited by Ben Dyer.

I've gotta say upfront that the book was a lot of fun. But I've also gotta say that I can't really recommend it to others - unless your mind is warped in a way very similar to mine.

Books like this, which take some aspect of popular culture and then add "and philosophy" to the title can work in two ways. They can examine the philosophical assumptions that seem to be implicit in cultural practices, perhaps challenging them, or exploring the cultural significance of what is going on. Often we get essays like this, from people playing the role of philosophically-informed cultural critic.

More often, however, the idea is to use whatever aspect of popular culture it might be (supervillains today, American sitcoms tomorrow) as a way of illustrating philosophical issues, or as a springboard to philosophical thinking.

Supervillains and Philosophy contains essays of both types, but as is usual with such books the emphasis is on the latter. The idea here is to use an amusing aspect of popular culture as way to introduce philosphical ideas; it's not to examine the cultural significance of supervillains or supervillain narratives.

Some books of this kind get into fairly sophisticated philosophical discussion, but that doesn't happen so much in this particular case. Although there are some good pieces that make deep points, most play around too much in the shallows. As an idiosyncratic matter, perhaps, I was especially unimpressed and annoyed by an essay on metaethics that ends up endorsing moral objectivism after offering very weak criticisms of what it calls "moral nihilism" - essentially moral error theory. The latter is presented in a simplistic form, and it is criticised largely for being counter-intuitive, i.e. it goes against all the objectivist assumptions that seem to be built into our moral thinking and discourse. But of course, that's exactly what error theorists claim; they argue that our moral thinking and discourse are riddled with objectivist assumptions that are untrue.


The only objection to moral objectivism that is discussed is that moral objectivists are likely to be inflexible and intolerant. Obviously, that's a weak objection. Moral objectivism may, indeed, have some psychological connection with inflexibility, etc., and I think that this is worth more exploration, but it's hardly a fatal philosophical flaw. It's possible to have a very flexible moral system, such as some kind of consequentialist system, while also claiming that whatever the system prescribes is objectively binding. So the author easily disposes of the only objection to moral objectivism that is actually identified. But of course the actual philosophical objections made by "moral nihilists" are far more subtle and penetrating.
Since the book aims to introduce philosophical ideas to people who are not philosophically trained, this sort of misrepresentation of the state of play in an important area of philosophy is quite serious. I would hesitate to give the book as a gift to someone who might appreciate it, thanks to this sort of thing. 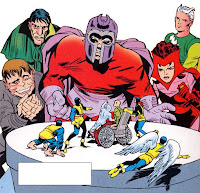 There is also a certain amount of poor editing, such as the frequent use of the word "lead" for "led", and there are even examples of dubious or incorrect scholarship. E.g., at one point, it is claimed that the Brotherhood of Evil Mutants first appeared, or were first given that name, in a newspaper article that the characters read in Strange Tales v. 1 #120, when it's well-known, at least to me, that they first appeared a month or two earlier in X-Men v. 1 #4. To be, as it were, super fair, I'm not sure whether or not they originally referred to themselves by that name, but the name was certainly splashed all over the cover of X-Men # 4.
So again, a bit of fun, but you'd be better off putting your hard-earned loot towards, oh, I dunno, maybe this book. :D
Posted by Russell Blackford at 1:19 pm

Yeah, that was my impression of the book; it was fun but wasn't particularly deep. But I didn't find the shallowness of the philosophy bad enough to affect my enjoyment; generally I found them at least okay.

I bought the Battlestar Galactica one at the same time and found it to be worse, as it wasn't as entertaining and wasn't as good with the philosophy, but that might just be me.

To be honest, I can't remember my thoughts on that particular essay right now.

Isn't this pretty much Garner's motivational cornerstone? His claim that sincere belief in the objectivity of values and the "correctness" of judgments inevitably leads to oppressive theocracy, for example the Indian caste system or the Roman Catholic curia? You callin' Garner weak?

Battlestar Galactica is intentionally "religious", producer Ron Moore often says himself, so it isn't much fun to uncover those undertones of cultural practice. Even if you would want to call mono- vs. polytheism a well-formed philosophical debate which I wouldn't. Perhaps this illustrates how didactic works on religious themes are never all that engaging.

Garner thinks we'd actually be better off going "beyond morality", but his criticisms of objectivism, in the sense of why he thinks it's incorrect, are quite different. They involve examining the concept of objective prescriptivity. If his philosophical objection to moral objectivism were merely that it causes some kind of moral inflexibility, yes, I'd say that was weak and could easily be dismissed.

I suppose my point is largely about human psychology. An engineering approach.

Of course there's a dark side; any decent power tool has the power to take your foot off with incredible speed and efficiency. Which seems to me to be the point Garner spends all his time making, except that his "power tool", "objective morality" is just mistaken, like the gun with the barrel bent back to point at the shooter. Is there more?