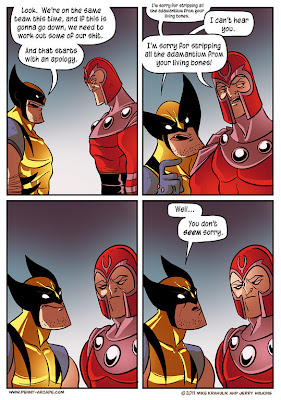 Enjoy this cartoon from Penny Arcade. I gotta say, though, that Logan has a bit of nerve demanding an apology over this incident. Yes, Erik ripped the adamantium out of him in one of their fights, which actually seemed to me at the time like a cool way to get a knock-out victory. More importantly, Logan was trying to kill him at the time and had succeeded in wounding him with those metal claws of his. I'm crying foul.

Edit: And it's canon that Logan actually preferred not having the metal bonded to his bones ... it took a lot for him to decide later on to get it put back.
Posted by Russell Blackford at 11:45 am

Yes, and because of Magneto's dastardly deed we got to learn that Logan's claws are actually bone. Or were originally bone. Or had a core of bone all along.