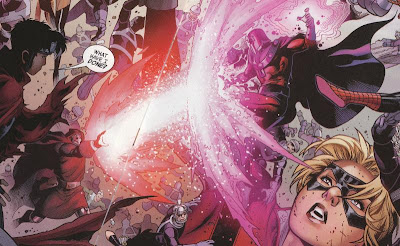 This is from issue # 4 of the current Avengers: The Children's Crusade miniseries, written by Allan Heinberg and drawn by the brilliant Jim Cheung. I'm open to correction, but as far as I know, this is the first time that Marvel's two premier villains have been shown on panel in head-to-head personal battle within the main continuity ... since an inconclusive skirmish published about thirty years ago. They'd normally be wary of each other. But the first three issues of the series have been depicting some extraordinary turns of events, even for superhero comics, that now have a lot of Marvel's A-list characters at each other's throats: villains fighting villains and heroes fighting heroes.
I love this image, with its depiction of total fog-of-war chaos as many of the characters fight it out - with Latverian military robots everywhere and stray bits of people's bodies around the edges (among others, we get a bit of Ms Marvel's legs in the top left corner, a bit of Spider-Man's lower leg over at the right, poor Stature looking hurt and distraught at the bottom, a glimpse of Quicksilver's torso in the distance, and young Wiccan at the left wondering how the hell he set off this war).
Meanwhile, the big supervillains, Dr. Doom and Magneto, go at it in the central position, with the body language showing them focused on destroying each other and neither seeming in the slightest degree hesitant or fearful. Cheung draws them as epic heroes, exulting in their prowess.
Hey, looks like I've gotta get hold of this.
Posted by Russell Blackford at 6:19 pm

The image is cut from the middle of a pretty cool two-page spread - by someone with a good eye. I've now read the issue. As always, some things move too quickly leaving me wanting explanations of how character X knew such-and-such. Heinberg does do the characters well, though.