Hmmm, not much villainy here, so we'll strike out (as it were) the reference to that in the title.

Striker, who can manipulate electricity, is one of the teenage heroes of Avengers Academy. He's among the students in an academy, run by the Avengers no less, for kids who are at risk of becoming supervillains. Avengers Academy is a relatively new book, with largely new characters, and it is building up its own mythos and ethos. If you ask me, Christos Gage is doing a great job in scripting the series, and, indeed, it's a fine example of what can be done with the (seemingly limiting) medium of mainstream superhero comics.

The not-so-shocking, but rather surprising, Avengers Academy news this week is that Striker is coming out, in issue #23, as gay. In the same conversation, Julie Power, a.k.a. Lightspeed, a character who has already shown lesbian tendencies in the past, is explicitly revealed as bisexual. 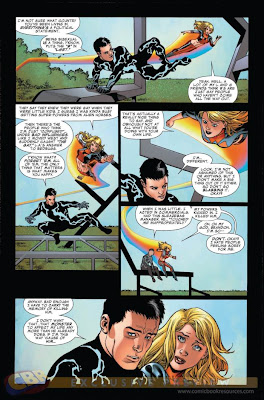 I'm linking to some discussion of all this on the gay-friendly fan site, Scans Daily (where the main emphasis is on Julie Power), and to an interview with Christos Gage. If you click on the links, you'll have a better chance to read the dialogue in the panels I've posted.

There have been some notes of caution about what Marvel is doing with Striker and Lightspeed, especially since Striker was abused as a child. The whole thing could play out in a way that merely reproduces some destructive myths. It looks, however, as if Gage is very aware of all the issues and will be approaching this with a lot of knowledge and sensitivity (see below for what he says in the interview).

A story scenario like this is always a risk, no matter how good everyone's intentions might be, but I get a good feeling from Gage. With luck, this story could be an example of very positive handling of LGBT issues in pop culture.

These paras from Gage's interview particularly impressed me:


I wasn't worried about a backlash for him being gay. I think it's pretty clear, if you go back and read issue #5, that this is something that's been part of his character all along, not something I did to draw attention to the book or pursue a political agenda or whatever. I think readers will realize that his shameless flirting, viewed in retrospect, was always intended to be revealed as a false front. It's been a lot of fun already to see fans on message boards look back to moments like those in issue #5, or issues #18 and 19, when the kids thought they were going to die and the others were kissing and saying goodbye while Striker's concern for Veil was much more that of a friend. So to my mind, anyone who is upset about him coming out would probably be upset about there being a gay character in the book at all, and there's not a heck of a lot I can do about that. I generally try to keep overt, agenda-driven politics (as opposed to political views expressed by a character that are a reflection of who that character is) out of my comics, and respect a wide range of different viewpoints, to me this is a human rights issue, not a political one. I think you see that feeling reflected in our country, in the generational shift that shows younger people, whether they lean left or right politically, overwhelmingly seeing homosexuality as something inherent in a person rather than a "lifestyle choice."

The thing I did have a little bit of concern about was that no one mistakenly think I was implying that being abused as a child somehow "made" Striker gay. Quite the opposite -- if he hadn't been abused, he may well have figured this out a long time ago. But making that clear is on my shoulders. Hopefully, I got it across in the story.

I did also have some trepidation tackling a teenager's coming out story when I'm not gay and I haven't been a teenager since the first Bush administration. But I'm not Asian or female or a mutant or a were-dinosaur, either. I did run the coming out scene in issue #23 past my pal Jim McCann, Eisner-Award-winning writer of "Return of the Dapper Men" and the Avengers Academy backup in "Avengers Solo," because I felt it was a key scene and I wanted to make sure it rang true and didn't take any unintended turns, and he was a tremendous help. Since straight kids don't have to "come out" as straight in a society where it's often just assumed, I did want the perspective of someone who's been there, and I really appreciate him providing it. But going forward, I'm going to approach Striker the same way I approach any of the other characters I write who aren't exactly like me -- in other words, most of them!


Besides, from personal experience, I can say that what he has Julie say about being bi rings *perfectly* true for me. Sure, the world is more accepting of homosexuality now than it was, say, thirty years ago, but if you're bi, then people who're straight figure it's because you can't get any action with the *opposite* gender so you turn to same-sex partners to try and get your rocks off, while gay people tend to treat you as being a gay person who's still in partial denial. (Ironically, I think this is even more of an issue for bi *males* than bi females; look at how female bisexuality is semi-accepted in the mainstream and has been a staple of pornography since the 70s, yet bi males are almost never depicted in the mainstream, and porn featuring male bisexuality is relegated to the "fetish" section, along with the pregnancy, bondage, and "pick a fold and fuck it!" fat-fetish stuff.

Like she says there, I'm not confused whether I'm straight or gay, it's not a fetish, and I'd really like to have people stop thinking it's either a paraphilia (I've got enough of *those* already, thank you!) or confusion on a binary issue. (For the record, I'd say it's 60% hetero/40% homosexual; I'm pretty even on who I'm attracted to, but that's more mental than physical; when it comes to random dirty pictures, I generally find women more attractive than men.)


These sorts of issues and experiences deserve an airing, and if Marvel can provoke some positive discussion about them ... more strength to its arm.
Posted by Russell Blackford at 6:53 pm