Marvel has the rights to its version of Dracula, and they're conducting a big push of late to build him up to be one of their major, major supervillains ... to rival the likes of Dr. Doom and Magneto. 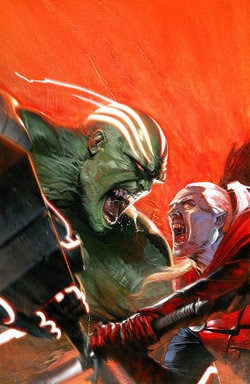 They can sure do with an injection of truly competent villains in the Marvel Universe. For some time now, Magneto has been a brooding presence within the X-Men, where he operates as a very effective uber-powerful anti-hero. Even Dr. Doom, whose personality shows fewer redeeming features than Magneto's - he's much more an out-and-out megalomaniac and much less a guy with a genuine grievance - has signed up to join the Future Foundation (the successor to the Fantastic Four). That was apparently the idea of little Valeria Richards (the child of Mr. Fantastic and Invisible Woman), but her "Uncle Doom" seems to have jumped at it.

Evidently, the most competent and dangerous Earth-based villains have learned the lesson that it's smart to work with the heroes as and when it suits their interests. And the heroes are prepared to employ the power and brilliance that these guys can offer.

Interestingly, Dracula seems set to play the role of anti-hero as well - if I understand this correctly, the Hulk is going to run amok in one sub-component of Marvel's "Fear Itself" mega-event that's just cranking up, and only Dracula is going to be in the right place at the right time to do something about it.

You can work out for yourself what all this means for our contemporary concepts of heroism and villainy.
Posted by Russell Blackford at 6:30 pm

Well, the sort of "anti-hero" villainous Dracula was already in at least part of the Marvel Universe; one of the X-Men novels has him joining with Excalibur and the X-Men to fight Belasco after Belasco poached some of Dracula's children. But in that novel while he did aid them and did keep his word -- which is also not an uncommon trait associated with Dracula, due to the oft-cited pretensions of nobility -- he still had his own agenda, still messed with the heroes, and still positioned himself to get more out of the deal than expected (Storm, for example).

If they make Dracula that sort of character, he could be a very interesting and indeed competent villain.

I think it's part of the Evil Overlord list that you should dress in bright colors and ally with the heroes when necessary. Maybe this is just a sign that Marvel's villains have gotten smarter?

Since the fall of Norman Osborn and the destruction of Bastion, there's been a bit of a vacuum in the Marvel Universe, and I'd like to see the a new, lurking uber-villain introduced. I don't really think Dracula could fill that role, he's a bit...well, unoriginal.

I wonder how long it will be before the writers have Doom and Magneto get back to their old tricks?

The way you frame this is enticing.

It sounds like Marvel has internalized a modern kind of morality where self interest is understood on a deeper level, and where the good guys and bad guys are pragmatic operators.

It's a good reflection of where we're at in western culture. Saints are quaint things now that most people don't believe in, and the movers and shakers--CEO's, celebrities, and politicians--are just as powerful as ever, but because we're disillusioned (a good thing), they are easier to analyze, and it's less taboo to do so.

I might tag along on this new Dracula storyline.