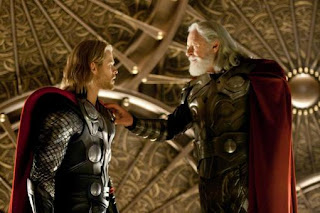 The new Thor movie will be released in Australia on 28 April - a week ahead of the US. The full schedule of release dates shows that some countries even get it on the 27th (though they are in later time zones than Australia, so in practice you'll only be able to see it a matter of hours earlier in Cairo than in Sydney).

Thor has a lot of potential: what's not to like about an Asgardian god, with a whole mythological back story, being exiled to Earth in the twenty-first century, and being forced to do heroic stuff against incredibly powerful villains such as the construct known as the Destroyer?

This will be a great opportunity to cheer for the heroes (or the bad guys, if you prefer) while munching popcorn.
Posted by Russell Blackford at 11:21 am

I can't wait. I've really enjoyed the other Avenger films so far, and have high hopes for Thor. I'm quite interested to see how Kenneth Branagh has interpreted the material - Silver Age superheroes not exactly being his thing.

The first full length trailer for Captain America was released recently; the film is to be released in July. Looks fun too.