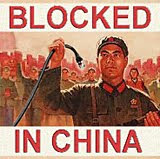 I'm, er, proud? bemused? to announce that Metamagician and the Hellfire Club is subversive enough to have been blocked in China. Perhaps you have been, too. (I'm assuming the site I've linked to is legitimate; the folks at IEET certainly seem to think so. But I'm always suspicious, so if someone has reliable evidence to the contrary, let me know so that I can redact this post.)

Of course, if the Australian government gets its way I might ultimately be blocked in my own country, since Rudd and Conroy are still planning to introduce a scheme of high-tech internet censorship - supposedly aimed at child pornography, but known to go far wider, even before the moral panics of the future that would inevitably take us increasingly down the Chinese Road.

So let me just remind my compatriots of the need to fight this measure every millimetre of the way, and at all costs. Nothing is more precious than our freedom of speech, without which none of our other freedoms is safe.
Posted by Russell Blackford at 12:12 pm

I feel like I have been too tame. I am not blocked from China. Nor from Brisbane, apparently.