Some photos from Dragon*Con - courtesy of Maria Maltseva 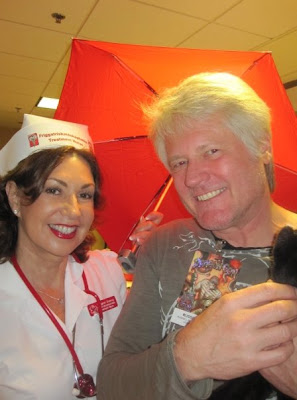 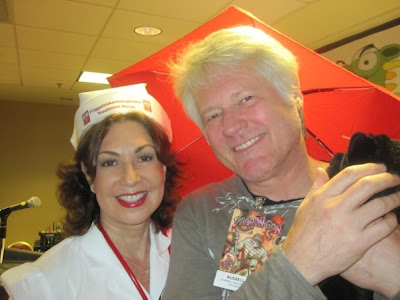 A couple of photos of me with Margaret Downey, and one with Maria Maltseva, from whose camera these all emanate. Thanks to Maria, who posted these photos and others on Facebook.

Immediately prior to these shots being taken, Margaret was giving a presentation at Dragon*Con, in which she played the role of a nurse who can cure people of their superstitions about Friday the 13th, black cats, and so on. In both of the pics with Margaret, I am holding the black cat, and appear to be trying to smother it to death. Poor pussycat! Note, too, the use of an indoor umbrella.

This is all part of the extraordinary diversity of stuff that happens at Dragon*Con, which really is something to behold. It's a blast just wandering around the convention, with its densely-packed array of costumed sf/fantasy/pop culture fans. The average age is much younger than most science fiction cons, and with some great bodies shown off to good effect by the skimpier costumes. I'm talking about both sexes here: the plentitude of attractive young women dressed - or, rather, undressed - as barbarian swordmaidens or as slave Leia, or whatever, provides one of the con's major attractions. But if you're interested in that sort of thing, some of the guys in superhero or Conan-style garb are built.

Meanwhile, I will, of course, remind Margaret Downey's many fans that she has an essay in 50 Voices of Disbelief. Available for pre-order from Amazon, in case you've forgotten.
Posted by Russell Blackford at 1:24 am