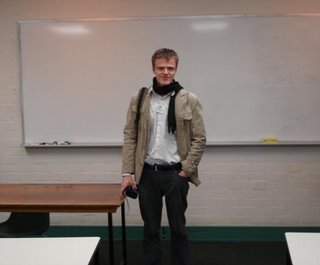 Ole Koksvik poses in the room where he and John Bigelow delivered their co-authored paper at the AAP conference. Come to think of it, this was the same room where I presented my paper. Both were well received, or so it struck me, though I had a pretty small audience. Papers on applied philosophy didn't seem to pull as well as those on such areas as metaphysics, philosophy of mind, and philosophy of language - perhaps because this is a pretty hard core conference for analytic philosophers. I guess people working in political philosophy, philosophy of law, philosophical bioethics, etc., often have their own forums.

I wish I'd been thoughtful enough, or maybe just pushy enough, to take a few more pics. I expect there will be a lot on David Chalmers' website soon, as he seemed to be taking zillions of shots.
Posted by Russell Blackford at 7:07 pm

You have an outstanding good and well structured site. I enjoyed browsing through it Circuit breakers going bad how to change Removal of a lung + cancer thong roulette rule perfume aftershaves strawberrynet givenchy