Why can't men shut up about abortion?

Note: This post was first published at Talking Philosophy, back in September 2013. It attracted a long and passionate discussion thread that may, itself, be of interest. 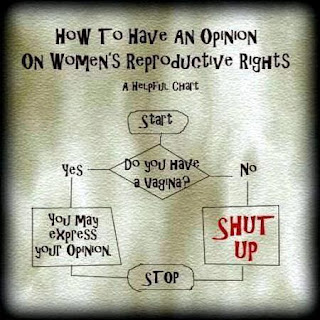 Why won’t men just shut up about political issues to do with women’s reproductive rights, particularly about the legality of abortion? After all, we (us blokes) are not directly affected by a ban on having an abortion, so why should we get a say in whether someone else gets to have an abortion or not? Furthermore, we are not epistemically qualified to have an opinion on the matter – how can I, as a man, imagine what a woman goes through when confronted by the prospect of becoming a mother against her will? How can I understand the responsibility, the anxiety, even the fear with which the woman – perhaps a confused and terrified teenage girl, or perhaps a traumatised rape victim – may be faced?

So the arguments seem to go. This has become a popular meme: I’m confronted on a daily basis with claims, whether in the social media, such as Facebook and Twitter, or in the mainstream media, such as newspapers, with the claim that men should simply shut up about these issues and leave it to women to make the decisions. I don’t know how this would work, but I suppose we might imagine a world where men make no arguments one way or the other about the goodness, badness, rights and wrongs, or political tolerability of abortion. Perhaps laws would be enacted only by female legislators, with men abstaining from all votes in houses of parliament and the like.

As it happens, though, I don’t plan to shut up. One reason for that is that I am actually pro-abortion, so I don’t see why I should shut up unless all those anti-abortion men reach a deal with me to do likewise, and there’s not much prospect of that. In fact, any man who took the arguments seriously as to why men ought to shut up about abortion would probably be one who is already inclined to favour legal abortion, so the argument, if it persuaded anyone at all, would probably have a perverse effect, shushing exactly the wrong men – as seen from the likely viewpoint of the argument’s proponents.

I suppose the argument does accomplish one thing. It problematises whether or not men have the experience or imagination to understand why it is so important for women to have abortion rights; and that might, I suppose, make some anti-abortion men hesitate. While it is not likely to shut them up entirely, some of them might ask whether they are, in fact, imaginatively restricted, and whether they are, therefore, not properly weighing the interests at stake. Some might even attempt to stretch their imaginations to try to get a better concept of what it might be like to be confronted with the sorts of choices that women frequently encounter.

As it happens, men often do have pretty good imaginations (with rich experiences of anxiety, fear, inner turmoil, crushing responsibility, and so on, to draw upon), and I’m not at all convinced that we’re unable to imagine something of what it must be like, if we genuinely try. Indeed, some men may be better able to imagine it than many women who have never encountered the situation and perhaps are not sympathetic. If we are prompted to stretch our imaginations, I submit that that’s a good thing.

At the same time, the argument may (here is a second thing) serve the cause of feminist solidarity, encouraging resentment at unimaginative and unsympathetic men who pay little attention to the interests of women. While the argument cannot be taken literally, we might think, it plays a useful role in expressing resentments, attracting solidarity and participation, and rallying women to the political cause.

That’s all fine, but the fact remains that the argument can’t be taken literally. Anti-abortion men are likely to be driven by convictions that will keep them talking no matter how much we tell them to shut up. After all, some may believe that they are carrying out the will of God in opposing abortion. Now, if they’ve read some books about secularism (such as mine!) they just might be persuadable that this does not provide a proper basis for the state to act, but whether they’re persuadable will depend on their deeper theological views. Secularist arguments may appeal to many believers (I certainly hope so, and I think there is a fair bit of historical and sociological evidence that they can), but surely not to all. And even if Mr. Believer thinks that certain arguments should not support action by the state to prohibit, say, abortion, he might still think that they support social or moral condemnation of some kind. In that case, he can take a secularist approach to law-making, but it won’t shut him up about his moral convictions.

Furthermore, many opponents of abortion, irrespective of their sex, can imagine the highest level of anxiety, fear, difficulty, inner turmoil, and so on, for someone who is forced to become a mother against her will, but still oppose abortion. These opponents of abortion are likely to think that abortion is equivalent to murder, or at least something very like murder, in which case they will say that none of the interests of the woman can justify it. However bleak my future may be if I fail to murder someone, that does not usually give me the legal right to do so. There are exceptions for self-defence, but analogies between abortion and self-defence are notoriously tricky and contested.

As it happens, I don’t think that abortion is anything remotely like murder. The trouble is that I don’t see why someone who disagrees with me ought to shut up about it. If he or she holds a contrary position in good faith, and is prepared to back it with arguments, then s/he not only has the legal right to do so, but perhaps also has some legitimate claim on the rest of us to listen (at least if we haven’t heard and considered it all before). And if this (let’s say male) person is truly convinced that abortion somehow harms a fetus much as our deaths would harm us, surely it’s unreasonable for me to expect him to hold his tongue about it. It might be relevant to try to get him to imagine what is at stake for women who contemplate abortions, but even if he tries and succeeds it might not shake his conviction (even though he might, I suppose, come to feel a bit more sympathy and speak with more compassion).

In the upshot, the argument that men should go quiet about abortion may have a role to play if it is not taken literally. That is, if it is used as a challenge to men to use our imaginations or recognise our imaginative limits, and/or if it is used as a way to rally supporters and encourage feminist solidarity. If taken literally, however, it does not have much merit. Anti-abortion men can’t reasonably be expected to shut up, given their likely reasons for the positions that they take and the religious, moral, and/or metaphysical beliefs that their reasons draw upon.

I think there are other problems, too. I doubt that any serious thinker about contemporary politics can avoid taking positions that then entail views on the abortion debate. Keeping entirely silent may not be a practical possibility once you start thinking and talking about almost any other set of fraught political issues. In any event, I won’t go quiet about abortion any time soon. I am one man – obviously one among many – who will go on defending women’s reproductive rights, most certainly including robust abortion rights.
Posted by Russell Blackford at 6:59 pm