Book review: Polly and the One and Only World, by Don Bredes (warning: some spoilers)

(Spoilers are relatively minor, but you are warned.) 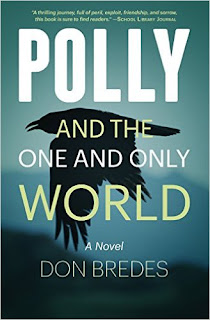 Polly and the One and Only World is a delightful, if sometimes harrowing and emotionally painful, hybrid of science fiction and fantasy, aimed at a Young Adult audience. It is set in the dystopian landscape(s) of a near-future USA wrecked by cataclysmic events that are, perhaps wisely, never quite explained or defined. In this bleak future, the post-collapse remnants of the nation are ruled by a fundamentalist Christian theocracy.

The novel's main character, Polly Lightfoot, is a teenage witch - for, yes, this is a world where pagan magic is real, and the born-again theocrats are engaged throughout in a ruthless, systematic, and quite literal, witch hunt. As the story begins, Polly has been sent from her parents' village in Vermont to what they hope will be the obscurity and safety of her aunt and uncle's home in Orlando, Florida. As eventually becomes clear, she also has a mission: to keep safe a powerful, precious, very rare grimoire. Soon, however, she falls under suspicion and needs to escape. The narrative portrays her efforts to evade capture by emissaries of the Faith and Truth Board, and somehow find her way north across a ruined countryside peopled by slavers, scavengers, and betrayers.

Polly does have the assistance of her familiar: a clever and versatile raven called Balthazar. As she proceeds, she finds other helpers and companions, not all of whom betray her trust - though betrayal is more the default than otherwise in this paranoid, desperate, sadly diminished civilization. In particular, she builds a friendship with another remarkable teenager, Leon, who is the novel's secondary viewpoint character. Leon grows in wisdom and stature as events affect him and he responds to them as bravely as he can. Indeed, his character develops more than Polly's, though to be fair she started out as a resourceful young woman, while he is initially shown as callow and easily bullied.

Polly encounters frustrations (or worse) at every step of her journey, and she finds it almost impossible to make even slight progress. Her quest increasingly seems stillborn and futile, as disasters strike one after another.

Yet Polly never gives up. In addition to the theocrats -  and the many individuals who'd sell out heretics and witches to them - Polly and Leon are opposed by a group of sinister and well-connected cultists, including a corrupt witch who wants the grimoire for herself. The teenage protagonists have enormous odds to overcome, and every step on their path provides a struggle of its own.

Polly and the One and Only World is an unmistakably didactic novel, teaching the values of courage, loyalty, and perseverance. It straightforwardly denounces religious zealots and their inevitable cruelty. This is no mere allegory, since the theocrats of the book's desolate future America are all-too-recognisable descendants of today's Religious Right. As the back-cover blurb suggests, the book is designed to "inspire young readers to appreciate their own freedoms and their own ability, today, to work for positive social and political change."

All of this might be condemned as heavy-handed and simple-minded by opponents of its message. If so, I choose to differ. The narrative is no less absorbing for its obvious moral and political implications, and its lessons emerge naturally from the overall story arc, the page-turning action, and the convincing dialogue between an odd mix of characters. Despite his evident - not to mention urgent - thematic purpose, Brede never gives an impression of merely preaching at us. Instead, Polly and the One and Only World is vividly written and always suspenseful; the story never suffers for the sake of its message.

In particular, Bredes is convincing in the way he depicts the various witches' spells. Although the effects (such as flying or shrinking) are dramatic, they appear realistic, largely through a narrative focus on the details and difficulties involved in working magic. There is much to learn here from the literary craftsmanship of a skilled novelist.

If the book has a fault it lies in the hasty - and perhaps unclear - ending. There is little in the way of closure or explanation, which may, of course, contribute in its own way to Bredes' purposes. The struggles continues, sad to say, as such struggles tend to in ordinary life. At the same time, there's a strong sense of an author setting things up for a possible sequel.

Such cynical thoughts aside, this is a lovely book. I enjoyed it very much, and I'd have delighted in it as a teenager. As a disclaimer, Don Bredes - whom I otherwise don't know at all - contacted me and asked whether I'd like to review Polly and the One and Only World. Perhaps he sensed a kindred spirit, given my own oft-stated worries about theocratic government and the ongoing socio-political influence of religion. He was right about that much, but I wouldn't praise his book if it weren't genuinely strong. Bredes has legitimate concerns about his country's future - he is not a mere fearmonger - and he's transmuted them to make a fine, suspenseful story.
Posted by Russell Blackford at 6:47 pm