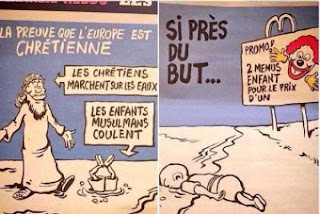 It's beyond me how people of good faith could interpret this as anything other than savage satire of European attitudes to refugees from the Middle East. And yet, once again, we see preening, authoritarian busybodies treating Charlie Hebdo in the most uncharitable way, as if, on this occasion, it were making fun of the drowned Syrian child.

Obviously we could debate whether the latest Charlie Hebdo cartoons are (in the immediate circumstances) in good taste, whether they might have some perverse psychological effect (i.e. an effect contrary to their artistic purpose), and so on. I doubt, however, that the original French audience would have misunderstood the satirical force of what they saw this week.

The mainstream and social media are, unfortunately, rife with people who will "call out" speeches, cartoons - and many other forms of expression - in the most harsh and simple-minded ways. Some of this must result from a lack of cultural sophistication: an inability to understand such things as irony (sometimes including unstable irony), complexity, artistic convention, and framing. But there is also the disastrous urge to provide signals of tribal righteousness.

[Edit, 20 September: I've now written about this at considerably greater length on the Cogito blog. I'll repost on this site when I have a minute.]
Posted by Russell Blackford at 10:56 am