Yes, big, big spoilers, because they killed someone important.

I wonder how long he'll stay dead. All the same, this is one of the characters who'd been central to the Marvel Universe, even if he'd been playing an increasingly peripheral role in recent years.

Go to Scans Daily for more.

But, yes, the bastards have killed off Professor X.

And he gets killed by an out-of-control, Phoenix-powered-up Cyclops, the guy who was like a son to him. This is in Avengers vs X-Men #11, by the end of which Cyke has gone totally Dark Phoenix on a whole bunch of Marvel's other major characters. This event had been getting boring for me, but I'm now interested to see how it ends in #12, and what happens afterwards as Marvel now rejigs (without actually rebooting) its universe. They are not only reshuffling writers in a big way. There will also be some dramatic reshuffling of character roles to look forward to (hoping they work). 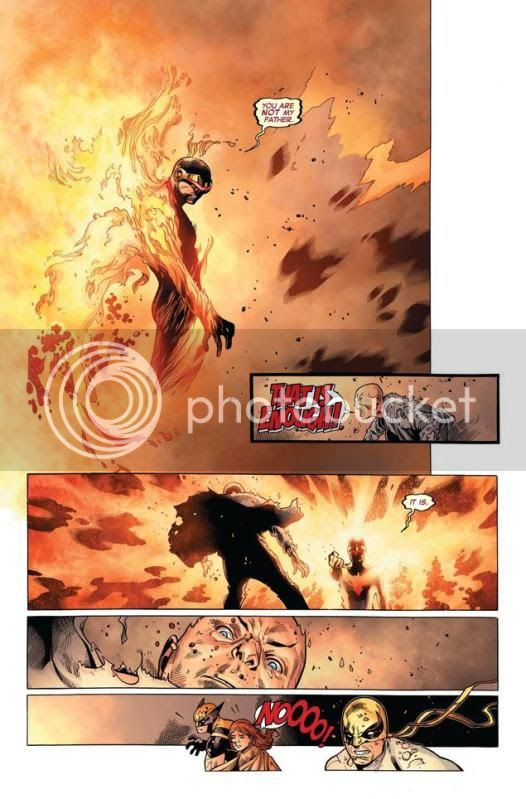 Posted by Russell Blackford at 12:05 pm

Why do you think Marvel's doing so much "shaking up" lately? Things seemed less turbulent in the recent past, especially as contrasted against DC.

These crossover events are off-putting when they're so frequent. What I really want from Marvel is meaty, engaging stories, yet (in my experience) these big "event" narratives tend to be confusing and tied up in a whole bunch of canonical fluff that's hard to appreciate.

I'm not against role changes or zany death narratives, I just question why they have to be tied to overblown (even by superhero comic standards) crossover tales. I'm not even against these huge silly events per se; it's just unfortunate that most of them either suck or are mediocre. I don't see why Marvel needs to do Mad Lib-like mashups every six months.

Marvel has been doing a series of 'universe-shaking' events continuously since the 'Secret War' miniseries in 2004 I think. House of M, Annihilation, Civil War, Skrull Invasion, Dark Reign... One flows from the other.

Oh, jeeze. But why? Do their sales fall off if there's not some new "no THIS is the cataclysm of cataclysms!" event every month?

^I think they might. That's part of the problem.

Xavier's been explicitly irrelevant since Claremont wrote him out of Uncanny back in '87 or '88. Then he got brought back into the fold during the Jim Lee/Bob Harras era to restore the X-Status Quo, which was corrected during Morrison's New X-Men run ten years later. Xavier's been vestigial for a long time, at least since his original class was selectively aged.

Marvel's editors of late have been quite keen on "killing off" characters during their Major Events only to have them return almost instantly. Think of Bucky-as-Captain-America, "killed" during last year's Fear Itself series only to return in the epilogue, or Thor, killed in the climax of the same series but brought back to life three or four months later. For me, this pattern of writing has utterly annulled the impact of any given character's death.

Xavier's death could have really interesting implications for the X-men, but I've no confidence that it will last. After all, isn't this the third or fourth time Professor X has been killed? What makes this time any different?

I agree. If you're going to kill off a major character like this it should stick for a long time (I have nothing against finding a way to eventually bring back any character, but let it be after a period of years for a new generation of readers or for long-term readers).

(I make an exception for major recurrent villains like Doctor Doom, who've always had a way of escaping apparent death, and whose "deaths" no one takes seriously.)

In all, much as I like Professor X as a character I hope we are not going to see his return any time soon.