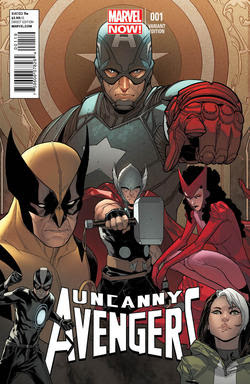 With Marvel NOW, Marvel is doing the nearest thing to a "new 52" - relaunching (though not rebooting) across all the central titles in its line. This includes the cancellation of Uncanny X-Men, even though it was performing strongly, both commercially and critically.

There will be an All-New X-Men title as its direct replacement, using what seems like a bizarre gimmick (though one that just might work). The original X-Men from the early 1960s (although the floating timeline concept requires us to place their first adventures only about a dozen years ago) travel through time into their future, i.e. our present. Here, they encounter a reality very different from what they imagined would unfold, and from the fruition of Professor X's dream of humans and mutants living in peace.

At this point, we don't know just what status quo they will encounter. Rumour has it that Professor X may be killed off by the time All-New X-Men starts, but we may be being misdirected. It looks certain that mutant/human relations will be pretty bad at the end of the current storylines that Marvel is wrapping up. The original five are going to find that at least one of their number (Jean Grey) is dead, and that their greatest physical and ideological enemy (Magneto) has not only never been definitively beaten, but is (perhaps) now swanning around in some kind of dark X-Men or quasi-Brotherhood group that includes the grown-up Cyclops, plus Emma Frost, and Magik. Again, we may be getting some misdirection from Marvel, but one way or another, the present is going to appear shocking and dystopian to the original, teenaged five. Judged against their dreams, it will look like a future in which they failed.

The other book that sort of replaces Uncanny X-Men is Uncanny Avengers, which includes characters from the X-Men and Avengers sides of the Marvel Universe. Apparently, Captain America is going to cobble this team together partly in his effort to repair human/mutant relations and partly to deal with some particular villainous threat (with the evil Red Skull behind it). It's a fascinating collection of characters, with Havok handed the leadership, plus Captain America himself, plus Thor, Rogue, Wolverine, and the Scarlet Witch. That's one human, one Norse god, and four mutants, with some rich back story that affects them all - for a start, it's difficult to imagine Rogue and Thor readily accepting each other as team mates. Also, the lineup includes a number of characters - Rogue, Wolverine, and the Scarlet Witch - who started out as supervillains, continuing the themes of redemption and moral greyness.

Although I'll miss Uncanny X-Men (surely it'll be back at some point), I'll be giving these books a look - they are based on innovative ideas, and I can see much potential in the situations created.
Posted by Russell Blackford at 9:50 am

The composition on that variant cover is terrible. The mouths don't look bizarre, otherwise I'd suspect it's by Greg Land.

I'm looking forward to Remender's Uncanny Avengers. He's certainly shown what he can do when handed over characters he really likes with Uncanny X-Force, and he (as well as I) really wants to write Havok. Hopefully he won't be stretched too thin with UA, UXF, and Secret Avengers (not sure if he's off of that, which might be the case).

Havok looks dreadful on that cover, doesn't he (bottom left corner for those not acquainted with the character)? And especially for the team leader.