I'm not sure how this is going to work, but X-Men Legacy will be reverting to #1 as part of the Marvel NOW revamp of of the Marvel Universe. 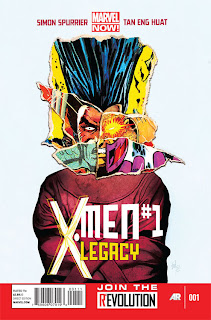 So far, so good, but apparently the focus is going to be on Professor Xavier's mad-as-a-cut-snake, but very dangerous and powerful son, Legion. I can't say I'm a huge fan of this character, and I'm not at all sure how he could be used in a semi-solo book like this. It will certainly make a change from X-Men Legacy's focus on Rogue for the past few years (with Rogue now becoming part of the Uncanny Avengers X-Men/Avengers mash-up team that Marvel is now creating). Your interpretation of the cover, with Legion in a straitjacket and the fragments of several important X-Men characters (in his mind?), is likely to be just as good as mine.

Some of these Marvel NOW rearrangements seem a little crazy, but you at least have to give whoever is dreaming them up a few points for originality. The main Marvel Universe is getting shaken up dramatically, if these announcements far in advance are anything to go by.

I suppose I should at least try out the first issue of this one, and see whether it hooks me.
Posted by Russell Blackford at 4:28 pm

I like this reboot for the simple reason that about 3 months ago I stated getting back into comics, had to do an hour of research to figure out how on earth the books connected, what to buy, what is a good starting point, etc.

And I LOVE Legion. I love the fact that he is mentally unstable because of childhood trauma. I think most "severe criminals" in the modern would reflect this. I don't think he has been fully explored correctly (although I am still waiting for my first issue of the new mutants to arrive so I can read that) as writes tend to take quite a few liberties with his psyche in order to serve the individual storyline. e.g. carey in legacy made him fully restored with a wristband, which inferred strongly that 'the real david' is not crazy, just the people who take over his body.

anyway, can't wait for it!